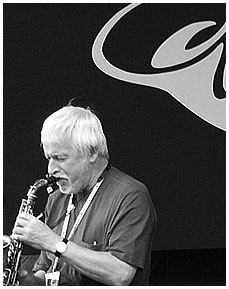 Jim Galloway, born James Braidie Galloway on 28 July 1936 in Kilwinning (Ayrshire), Scotland), is a jazz clarinetist and saxophone musician. Since his emigration in the mid-1960s, he has made Canada his home. In the late 1970s, he founded the Wee Big Band. Walking On Air, one of his albums was nominated at the 1980 Juno Awards for Best Jazz Album. From 1987 to 2009, he was the artistic director of Toronto Jazz Festival Toronto Jazz Festival. In 2002, he was made a Chevalier de l’Ordre des Arts et des Lettres. The Toronto Jazz Festival website still lists his musical performances. From wikipedia Jim Galloway is a great swing soprano player, with a lighter tone that Sidney Bechet. He has recorded many albums with other veterans. Before emigrating from Scotland in 1965, he played alto and clarinet in Scotland. He quickly became a specialist in soprano and led the Metro Stompers (1968), putting together the Wee Big Band (1978), as well as hosting the weekly jazz radio show Toronto Alive! (1981-1987). Galloway, who has performed at numerous jazz festivals and parties, has recorded for Music, Hep, and Sackville.