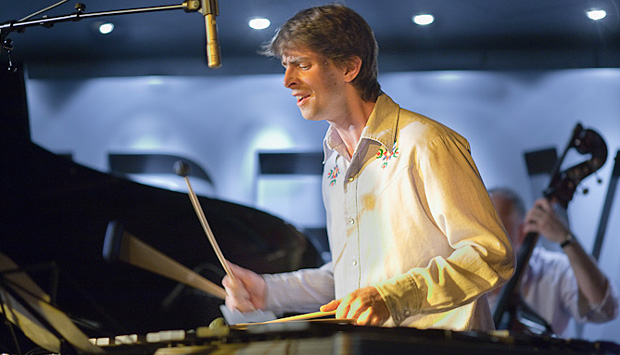 b. c. 1983, Cornwall, England. Hart, who began playing piano and drums in his early years, was an active member of the Cornish youth orchestras. He also played jazz and classical music. He won the John Dankworth Award as Most Promising Artist in a BBC Big Band Competition during his teens. He was educated at Chetham’s School of Music in Manchester under Steve Berry and David Hassel. Then he attended London’s Guildhall School of Music. He was a drummer with the National Youth Jazz Orchestra from 2001 to 2003, and a prominent figure on the London jazz scene. He is a vibraphone player and has performed with Alan Barnes, Roger Beaujolais. Paul Clarvis. Martin Drew. Kai Hoffman. Stan Sulzmann. Stan Sulzmann. Hart founded Gemini with Ivo Neame (saxophone), Mick Coady on bass and Tom Skinner on drums in 2003. He won the British Jazz Rising Star award in 2006 and a medal from Worshipful Company of Musicians. Hart composes a lot of the music that he performs with with his group. He has a strong affinity with jazz composers from previous generations, but his music is current. Hart is a performer and composer, and also teaches composition at John Dankworth’s Wavendon Music Centre as well as in other schools across the UK. Allmusic