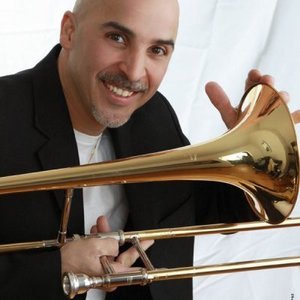 Jimmy Bosch is a leading trombone player in contemporary Latin music because of his expressive playing style. This is characterized by soaring melodies and soulful beats. Bosch, a New Jersey native, is known as “El Trombon Criolo” in Latin communities. He has helped to strengthen the music of top-notch Latin groups such as Ruben Blades, Son Del Solar and Eddie Palmieri. Since 1996, Bosch has been the leader of his own group, The Masters. Bosch, the 11th child in a family of eleven, started playing trombone at school when he was 11. He made his professional debut in 1978 with Arcoires, a Hoboken-based merengue group. Bosch enrolled at Rutgers University in 1978 to study classical music and was a member the influential Salsa group Manny Oquendo Y Libre. The group continues to record and perform with him occasionally. Soneando Trombon is Bosch’s first album as a bandleader. It features guest appearances from Cuban trumpet legend Chocolate Armenteros, and singer Pete Rodriguez. Salsa Dura was followed in 1999.