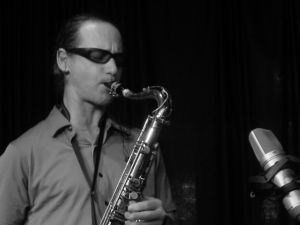 b. 1958, New York City. USA. From the 1970s, Halperin was active in the New York jazz scene. He studied with Lennie Tristano, and, after Tristano’s passing, with Sal Mosca, a pianist-teacher. He was part of Warne Marsh’s quintet in the mid-80s. This included pianist Barry Harris, bass player David Williams, and drummer Albert “Tootie” Heath. They recorded 1986’s Back Home. After a long period of silence, he recorded a duo with Mosca, Psalm in 1997. In 1997, Halperin went to Norway with bass player Thomas Winther Andersen (Line Up). However, it wasn’t until the early 2000s and an association with Cadence Jazz Records/Creative Improvised Music Projects, that Halperin started to get the respect he deserves. Halperin’s work as a performer and composer is coolly objective, fascinating in its complexity, and compelling through its undercurrents of restrained tension. While Tristano’s time with Halperin has left an indelible impression, his artistic growth and integrity have allowed him to pursue his own artistic path within contemporary jazz. Other musicians Halperin has recorded and worked with include alto saxophonist Richard Tabnik and bass players Sonny Dallas and Dominic Duval as well as drummers Jay Rosen, Bill Chattin, and John McKutcheon. Allmusic