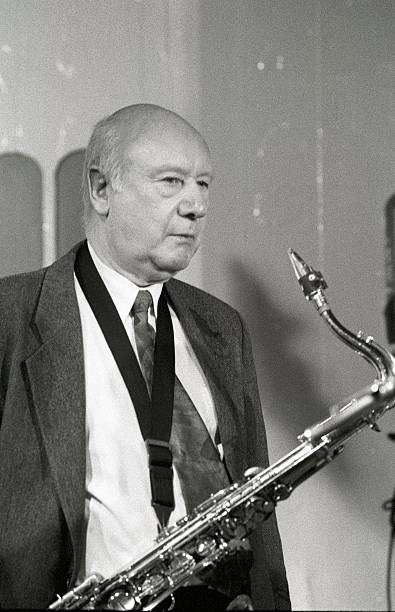 Jimmy began studying piano at age eighteen and then took up the saxophone when he was sixteen. He began to consider a career in music as a professional musician at that time. He auditioned for the first tenor position in Leslie Thorpe’s band at Aberdeen’s Beach Ballroom. The job didn’t come to him. Jimmy fled his native Scotland soon after to seek his fortune “down south”. He heard that Humphrey Lyttelton was conducting auditions for a saxophone musician so he decided to go along and have a try. The venture also ended in failure. The obvious realization that Jimmy had other talents, such as they were at the moment, led him to embark on a ship to experience several world tours as a musician aboard a ship. Jimmy returned to England and took up residence in London, where he joined the Ken Mackintosh Band on first tenor. He joined the BBC Radio Orchestra two years later, replacing Art Ellefson as first tenor. The BBC changed the name of the Orchestra’s dance band section to the “BBC Big Band” during this period. Jimmy first made an appearance on the London jazz scene during his time at the BBC, performing gigs at Bull’s Head in Barnes alongside the late Tony Lee (and Bill Le Sage) respectively. Jimmy joined Bill Le Sage’s suggestion and formed the Jimmy Hastings/Dave Horler quintet. Dave Horler was sent to Germany by the Cologne Radio Orchestra. Jimmy then joined John, his younger brother, and formed the Jimmy Hastings/John Horler trio. With the addition of Phil Lee as guitarist, this became a quintet, trio, quartet, and quintet. However, they have now settled down into a quartet, with John playing piano or Phil on guitar. Jimmy quit the BBC after four years to pursue a new career in freelance music. Jimmy began to play solos on radio records, and was also recording music for commercials, TV, films, and television. The West End Musicals were born, with “Treasure Island”, at the Mermaid Theatre. After a successful national tour, the most recent West End Musicals was “Crazy For You”, a Gershwin musical. There were also “Treasure Island” at the Mermaid Theatre and “Treat Island”, “A Chorus Line”, “Richard Rodney Bennett’s” “Jazz Calendar”, Andrew Lloyd Webber “Jeeves”, Cole Porter “High Society”, Kurt Weill “Happy End”, “Dash” and “Singing in the Rain”, which enjoyed a lengthy run at the Apollo Victoria. Jimmy has also been a substitute in many other shows, including “Cats”, Starlight Express”, West Side Story, “Anything Goes”, and “Anything Goes”. Jimmy has performed with Frank Sinatra and Sammy Davis Jr., Tony Bennett, Sarah Vaughan and Aretha Franklin over the years. He has also worked for Nelson Riddle and Robert Farnon as well as Henry Mancini, Henry Mancini, and Benny Carter. He has had the pleasure of performing with Bill Berry, Art Farmer and Bill Berry as well as Lanny Morgan, Billy Mitchell, Al Grey, and Lanny Morgan on jazz. Jimmy was also a member of the rock band “Caravan”, alongside his brother Pye. He appeared on all their albums, and sometimes on stage at radio and TV sessions. The band received a gold disc for their third album, “In the Land Of Grey and Pink”. Recent revival concerts have seen them enjoy great success. Thirty years after Jimmy’s disastrous audition with Humphrey Lyttelton was over, Humphrey phoned to offer the job. Jimmy continues to enjoy every moment of Humphrey’s band. Jimmy was primarily a tenor player up until 1993, but he joined Humphrey’s band in 1993 on alto saxophone and clarinet. He has been on numerous tours with the band and is featured on all their albums. The Band recorded Radiohead’s 2001 album, “Amnesiac”, in 2001. Jimmy was the clarinet player. Jimmy is also a member the John Dankworth Gen Band, playing clarinet, clarinet, baritone saxophone and clarinet. Jimmy is the London College of Music Professor of Jazz Saxophone and the Royal Marines School of Music Professor of Saxophone from 1998 to 2004. He is always aware of his humble beginnings and wants to help young musicians. Jimmy is a sought-after performer at all major jazz venues across the country, whether he’s performing solo or with his own band. He is a regular deputist with many of the top bands of today including the Don Lusher Big Band (Paul Lacey’s Back to Basie Band), the Syd Lawrence Band and the Echoes of Ellington Band. from www.jimmyhastings.co.uk