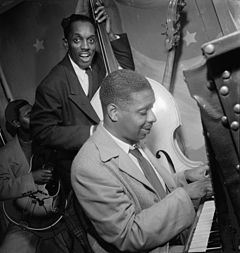 James Henry “Jimmy” Jones was an American jazz arranger and pianist. He was born December 30, 1918 in Memphis, Tennessee. Jones was a child and learned piano and guitar. From 1936, Jones was a member of various Chicago orchestras and played with Stuff Smith from 1943 to 1945. He played with Don Byas (1945), Dizzy Gillespie (1945), J.C. Heard (45-47), Buck Clayton (46), and Etta. Jones (1946). After a long illness, he accompanied Sarah Vaughan between 1947 and 52. He returned to the stage in 1954-57. He recorded an album with Clifford Brown in 1954 and was there to accompany him on his European tour. He also performed with Helen Merrill, Gil Evans and others around this time. He accompanied Anita O’Day on her 1959 appearance at Newport Jazz Festival. In 1959, he also worked with Pat Suzuki, Morgana King, and Dakota Staton. He was a New York pianist and arranger who worked with Budd Johnson and Nat Gonella in the 1960s. He accompanied Chris Connor in Where Flamingoes Fly, he led the Duke Ellington Orchestra, and acted as a substitute piano for Duke Ellington when Ella Fitzgerald was with him. In 1967, he went on tour with Jazz at the Philharmonic. He worked with Kenny Burrell, Cannonball Adderley and others in the 1970s. Jones was a pianist on recordings by Harry Sweets Edison and Big Joe Turner. He also played the piano for Frank Wess and Milt Jackson. Wikipedia