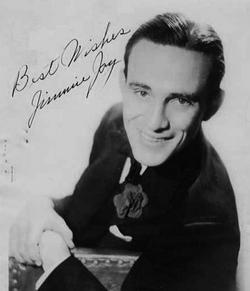 Birth: Apr. 20, 1902 Death: Mar. 7, 1962 Musician. Born James Monte Maloney, he was a clarinetist who led the Jimmy Joy Orchestra. His band began playing at the Joyland Park, Galveston, Texas in 1921. The park management called the band Jimmy Joy. He was already performing on a weekly jazz concert on San Antonio WOAI radio and the major vaudeville circuit by the 1930s. It became a favorite band in the Midwest and performed at top hotels like the Muehlbach, Kansas City, Peabody, Memphis, Baker and Adolphus Hotels, Dallas, and the St. Anthony Hotel, San Antonio. He recorded for Mercury Records and made frequent trips to the East Coast. In the early 40s, he was also playing at Santa Monica’s Casino Gardens. He was 59 years old when he died in Dallas, Texas. from http://www.findagrave.com