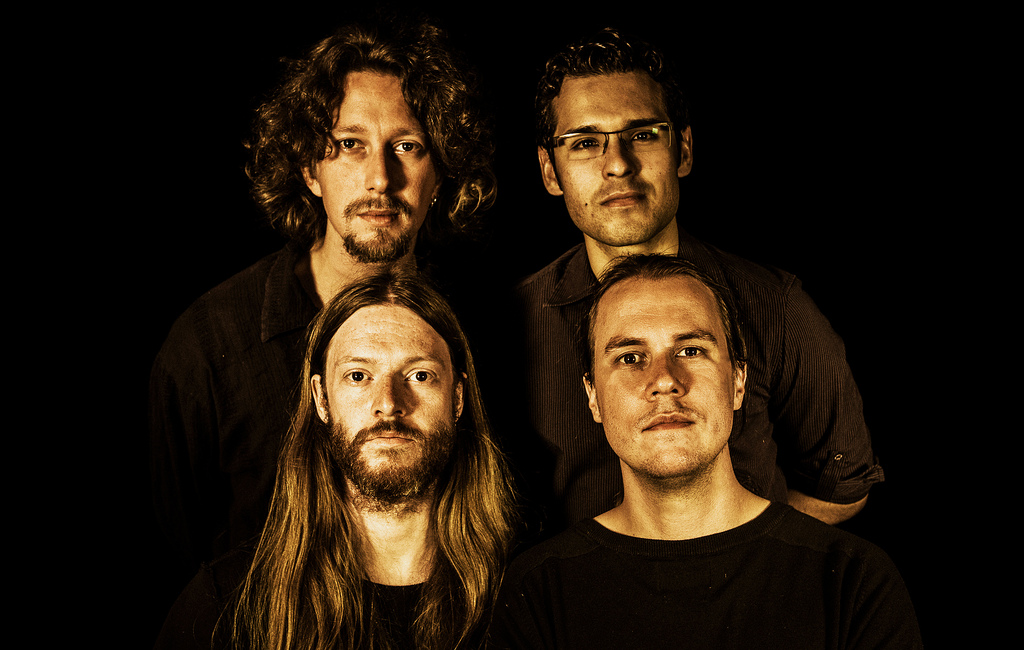 NDR, a German broadcaster, described Jin Jim’s rise to the top of the German jazz scene as “Vertical liftoff”. If you consider the brief backstory that culminated in their debut album ACT, Weisse Schatten / White Shadows, these words seem justified. Jin Jim was founded by Daniel Manrique Smith, a Peruvian-born flutist, Ben Tai Trawinski, Johann May, and Nico Stallmann, a guitarist, drummer, and bassist. They were elected by the public to the finals at the JazzTube Festival in Bonn their first year. The quartet won the “Future Sounds” competition at Leverkusener Jazztage festival from a field that included nearly 200 entries. They also released their first album, “Die Ankunft” (“The Arrival”), in the following year. Their success is due to their innovative approach to music. Here, Latin, jazz, and rock all come together with maximum impact. The group’s repertoire reflects their core direction. It is ‘rhythmically complex and harmonically accessible with influences ranging form flamenco to Indian pop and even Indian music,’ which brought Jin Jim to the attention ACT’s Young German Jazz series. This initiative aims to develop the talent of young German musicians and turn it into success. In 2016, Jin Jim embarked on their first major tour with the assistance of the Goethe Institut, Germany’s international cultural organisation. The couple first visited Peru, where Daniel Manrique-Smith was born, and then they toured five African countries in the fall. Their moment arrived in 2017. Manrique-Smith says, “We were fortunate enough to be at the right place and time.” The Jazz Baltica Festival was where they performed on the mainstage. We received standing ovations. “I had goose bumps the next three days,” Siggi Loch from ACT, who signed Jin Jim to the label’s contract, was among the ecstatic crowd. They recorded “Weisse Schatten” in the studio in February 2018. Jin Jim once again demonstrated how individual and refined their sound is. It’s rare to find a young band that is so cohesive. This is because, although Jin Jim was founded in 2013, all four of its members were aged around 30. However, the common threads which bind them together date back even further. Trawinski is from a musical family. His ancestors are from Poland and Croatia. He has played the guitar, flute, piano, and singing before the bass was his instrument. May is a musician who spent a period in Havana studying Latin American music. Stallmann has played drums with many bands, from folk and rock n’ roll to modern jazz or world music. He also works on theatre and dance productions. They all studied together at the Arnheim Conservatory, Netherlands. These common connections explain why May, Trawinski, and Stallmann prepared the rhythmic foundation for complicated, fast and tricky pieces like ‘,Duende”, or ‘,Mankafiza”, which allowed Daniel Manrique Smith’s flute to fly freely. Flute is a rare instrument of jazz. It’s often used to add a tone-color or tempo. Its role in Jin Jim is far more than that. Manrique-Smith studied at the Musikhochschule in Cologne and in Frankfurt before he played with Dee Dee Bridgewater and Samuel Rohrer. He plays the instrument in a unique, virtuoso, and versatile way. He combines many expressive possibilities in “Weisse Schatten”, including a subtle, classical tone or the consistent, yet light-breathing attack and bright colors from Latin America to complete unrestrained jazz solos. Manrique-Smith can be seen singing, humming, and blowing into his instrument. There’s more. There’s more. Jin Jim is well on their way. http://jinjim.com