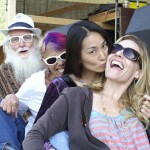 The Jitterbug Vipers are a cult of jazz called “viper music”. They take you back to a time when jazz music filled the dance floor. The Jitterbug Vipers are infused with the ribald wit and quaint sophistication of classic artists such as Ella Fitzgerald, Duke Ellington and Count Basie. Francie Meaux Jeaux, bassist, says that they don’t consider themselves a jazz band. We think of ourselves more as a 1930s-rock band. We just wail.” The Austin-based quartet is raucous, refined, swinging and toking, and draws crowds into its blissful joy whenever it takes to the stage. Modern takes on the 20s, 30s and 40s are stiff and repetitive. They have been shackled by nostalgia. The Jitterbug Vipers’ “swingadelic” tunes are full of energy, excitement and genuine surprises. The Jitterbugs are Slim Richey (a Santa Claus-bearded swing guitar and jazz legend) Francie Meaux Jeaux (a rainbow-haired, boisterous bassist who lays down slinky lines), Masumi Jones (one of Japan’s best big band drummers) and Sarah Sharp (the group’s main songwriter). Slim Richey, an American treasure and a living part of American history, is a true American treasure. His humor and elegance as an instrumentalist placed him in the same category as Roy Buchanan and Danny Gatton. He is surrounded by three highly talented women whom he affectionately refers to as the Hidy Hidy Hops. However, he remains the group’s spiritual leader. Francie Meaux Jeaux, the bassist, didn’t start playing until she met Slim. I had a little bit of acid the day I married Slim. He gave me a huge, ugly bass. I began plunking around and became hooked immediately.” She performs live with her back to the crowd in an “Ass to the People”, style created by Masumi Jones. This motto has been a rallying cry of the group and is a favorite bumper sticker in Austin. Slim met drummer Masumi Jones (the “Tokyo Tsunami”) at a jazz jam session. She grew up in Japan and was passionate about big band drumming. Later, she studied American music at Berklee College Of Music. Masumi giggles, “I didn’t realize what kinda band I was in until three or four months later, when it was legalize marijuana demonstrations.” Berklee also educated Sarah Sharp, the primary songwriter for the Jitterbug Vipers. Although she was initially a sub for the band, her sweet flow and playful innuendo soon won over critics and fans. Sarah is a co-writer with Andrea Perry and she also writes songs for the Jitterbug Vipers. Kaliyo and Andrea Perry create smart indie pop. They have had great success placing songs in fashion, film and television. The Jitterbug Vipers commissioned nine classics to be written for their latest album, Phoebe’s Dream. They wanted to evoke the rousing spirit of the swing era’s golden days. These originals are paired with timeless songs like Billie Holliday’s Billie’s Blues and Ella Fitzgerald’s classic Undecided. The quartet is a regular gigger and has been a festival favorite, appearing recently at Kerrville Folk Festival (Old Settlers Music Festival) and Utopia Fest (Undecided). Sarah exclaims incredulously, “Looking at the crowd at festivals, theaters, or The Continental Club, sometimes, I have to remind my self this is real.” “It’s such a trip!” from http://www.jitterbugvipers.com