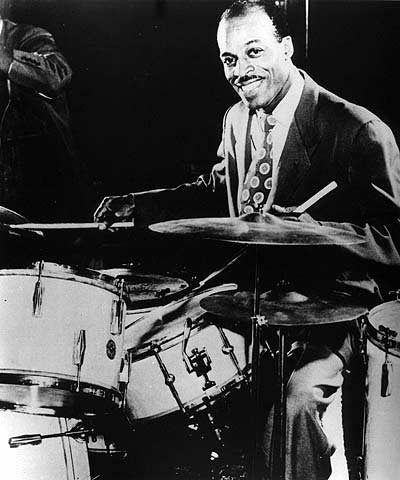 Jo Jones changed the role of the drummers’ timekeepers from the bass drum, to the hi-hat drum cymbal. This greatly influenced all bop and swing drummers. Louie Bellson and Buddy Rich were two of the many who benefited from Jones’ light, forceful playing. Jones swung with the Count Basie Orchestra using the right accents. Jones grew up in Alabama and worked as a tap-dancer and drummer at carnival shows. In the late 1920s, he joined Walter Page’s Blue Devils of Oklahoma City. Jones spent a time in Nebraska with Lloyd Hunter’s group. He then moved to Kansas City in 1933 and joined Count Basie’s team the next year. In 1936, Jones travelled with Basie to New York and formed one of the most important rhythm sections. Jones was with Basie from 1944 to 1946 when he was serving in the military. He was there until 1948. Later, he enjoyed many reunions with Basie alumni. He recorded some Jazz at the Philharmonic albums in the 1950s, along with Billie Holiday and Teddy Wilson. Jones also appeared at the 1957 Newport Jazz Festival alongside both Basie as well as the Coleman Hawkins–Roy Eldridge Sextet. Jo Jones was a session leader for Vanguard (1955-1959) and Everest (1959-60), which included Jazz Odyssey, on which he reminisced about his youth and played solo drums (1970s) and sessions for Pablo and Denon (1970s). He was later known as “Papa Jo Jones” and was considered a wise, but brutally honest, elder statesman. From allmusic, Jones’ most important work was with the Count Basie Band from 1934 to 1948. There are many examples of Jones’ outstanding playing in “The All American Rhythm Section”, which included Walter Page, Jones, Walter Page, and Freddie Green. The Complete Decca Recordings 1937-1939 (GRP / Decca Label), “The Essential Count Basie Volumes One, Two, and Three” (covering those same years on the Columbia / Okeh labels), “Count Basie 1938-1939” (“Jazz Chronological Classics”), “Count At The Chatterbox”, (1937: Jazz Archive), “Count At The Chatterbox”, and “Golden Years Volumes One through Five” (1941-1945; EPM label). Verve’s boxed collection, “The Complete Jazz At The Philharmonic on Verve 1944 to 1949”, includes Jones’ excellent work as a featured performer in the Jazz At The Philharmonic, which also included his participation in “Perdido”. Jones’ two works as an artist leader are still available. They are “The Essential Jo Jones”, (1955: Vanguard), and “The Main Man”, (1976: Fantasy / OJC). If you want to see classic Jones in action, you can watch him participate in two commercially-issued events on video. He was part of “Jazz On A Summer’s Day” at the 1958 Newport Jazz Festival, where he backed Chuck Berry. Also, the iconic television program “The Sound of Jazz” from 1957. from http://www.drummerworld.com