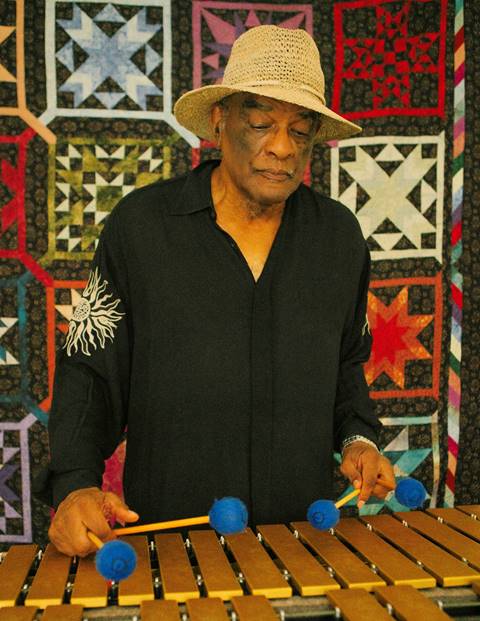 Joe Chambers is a versatile and tasteful master of all postbop idioms. Chambers manages an ensemble with a light touch; his timing is perfect and his understanding of dynamics is superb. Chambers is not a flashy drummer, but he is a great collaborator and makes every group he plays a part in as enjoyable as possible. Chambers was a Washington, D.C., resident in his twenties. He moved to New York in 1963 and played with Eric Dolphy (Freddie Hubbard), Jimmy Giuffre, Andrew Hill, and others. Chambers was a member of a group of more advanced musicians who were associated with Blue Note in the mid-’60s. These included vibist Bobby Hutcherson, Wayne Shorter, Sam Rivers, and Joe Henderson. Chambers was an original member of Max Roach’s M’Boom percussion group in 1970. Chambers was a member of many jazz’s greatest elder statesmen during the 1970s, such as Sonny Rollins and Tommy Flanagan, Charles Mingus and Art Farmer. Chambers formed the Super Jazz Trio with Flanagan and bassist Reggie Workman. He co-led a band that included Larry Young, an organist, in the late 1970s. Chambers recorded with Chet Baker, a trumpeter, and Ray Mantilla, a percussionist in the early 1980s. Roach remained his associate throughout the ’90s. Chambers was a solo artist and released many albums, including Almoravid (1973), New World (1976), New York Concerto ( 1981), Phantom of the City (1992), Mirrors (1998) and Urban Grooves (2012). Chambers began 2006 with Outlaw and continued with a steady stream albums for Savant Records, including Horace to Max (2010) and Joe Chambers Moving Pictures Orchestra (2012). Landscapes (2016) features Ira Coleman as bassist and Rick Germanson as pianist. Allmusic