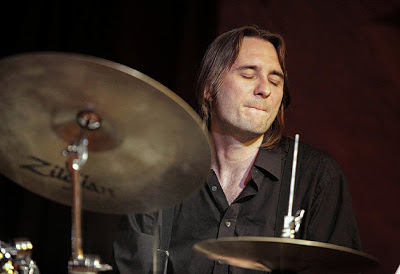 German born. Since Jan 07, New York. Freelance musician. Joe Hertenstein has performed at the Philharmony in Cologne, the Moers Festival, the Congress Hall London for BBC, the Congress Hall London for Germany, the Congress Hall London for BBC, the Opera House, Toronto, the World Trade Center, the John F. Kennedy Center for the Performing Arts Washington DC, and Carnegie Hall, Roulette and Issue Project Room. His performance was praised by “All About Jazz NY” magazine in 2005, stating that “Joe Hertenstein’s drums seem like they are shaping the music from bottom up “….” He has been awarded numerous grants and awards on both sides. In cooperation with the German Academic Exchange Service, the City University of New York granted him a scholarship and tuition waiver in 2007 to finish his Master of Arts in Jazz Studies. Before moving to New York, Mr. Hertenstein studied music at Cologne, Rotterdam and Berlin. He was awarded multiple Jazz prizes in Europe, including the Dutch Concours Ceramique Jazzcontest and the German NRW Jazzart-Prize. He has been invited to perform at many festivals including the Hoeilaart Jazzfestival Brussels, JekerJazz Maastricht, the Leverkusener Jazztage and the Moers New Jazz Festival. He was invited by the BBC to perform live at Bush Hall, London in 2009 with Rana Farhan, an Iranian dissident. Mr. Hertenstein has recorded and performed with many international musicians, including Kenny Werner and Chris Potter, Juini booth, Kenny Wollesen and Graham Haynes. In 2004, and 2005, he toured Europe with Carlos del Junco (Canadian blues harpist), His music has been released on labels like MoersMusic and Cleanfeed as well as Red Toucan, Red Toucan Jazzwerkstatt Berlin, Konnex and Leo. He has performed as well as taught at Offene Jazzhausschule Cologne. From 2002 to 2007, he was a faculty member. In New York, he was a faculty member for drums, percussion and currently teaches at Trinity School in Manhattan. Stef Gijssel, a Belgian music critic, awarded Hertenstein the ‘Happy New Ears Award for best innovative listening experience in 2011. Joe Hertenstein’s newest project, “FUTURE DRONE”, features Achim Tang, German bassist, and ‘Improviser in Residence’ in Moers 2011. He is also the winner of Thelonious Monk Competition 2008, as well as tenor saxophonist Jon Irabagon. Jazzwerkstatt Berlin released the debut album of “FUTURE DRONE” in June 2012. Hertenstein is a member the Butch Morris’ NY ensembles Nublu Orchestra, and ‘BUTCH MORIS CONDUCTS LUCKY CHENG’. Allabout Jazz