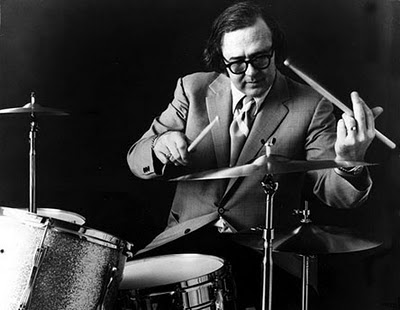 Morello was born July 17, 1929 in Springfield (Massachusetts). He began playing violin at six years old and, three years later, was featured in the Mendelssohn Concerto with the Boston Symphony Orchestra. At age 15, he switched to drums. He first studied with Joe Sefcik, a show drummer, and then he continued his studies with George Lawrence Stone. Morello says that he used to work from his Stick Control book and, once he taught me how to play the stick patterns, he would teach him accents. Stone was so impressed by Morello’s ideas, he incorporated them in his next book Accents & Rebounds. It is named after Morello. Morello later studied with Billy Gladstone, a Radio City Music Hall drummer, who is one of the most technical drummers of all times.
Morello says that his training was primarily classical snare drum technique. But I did it the way that I wanted. A good teacher should encourage creativity in the student. Some teachers require that students play in a particular style. Allow the students to be themselves and let them develop their talents. They will be able to use the instrument in the way that they prefer.

Morello moved to New York City in the 1980s. He worked with a number of jazz musicians, including Tal Farlow, Phil Woods, Stan Kenton, and Johnny Smith. Morello was working at the Hickory House with Marian McPartland. His technical skills attracted the attention and support of many drummers. They would gather around Morello at a back table during intermissions just to see him with a pair on a folded napkin while he worked out. Jim Chapin shares stories of unsuspecting drummers trying to impress Morello with their fancy licks. Morello would pay attention and then ask, “Is that what you’re doing?” Morello would listen intently and then say, “Is this what you’re doing?”

Morello was a well-known jazz drummer and jazz musician who spent 12 years with Brubeck. He also performed one of jazz’s most iconic drum solos on “Take Five”, the quartet’s recording. Morello comments on the solo, “When people say ‘technique’ they usually mean speed.” “But, the solo for ‘Take Five’ had very little speed. It was about space and playing with the barline. Because it was so different, it was obvious.

In 1968, Morello left Brubeck and became a highly-respected clinician, teacher, and bandleader. His latest album, Going Places, was released last year (1993) by DMP. He has been featured on more than 120 albums. He is the author of several drum books including Master Studies, which Modern Drummer Publications publishes. Also, he has created an instructional video for Hot Licks called The Natural Approach to Technique. Morello was elected to the Modern Drummer magazine Hall of Fame, in 1988. He has been honored with numerous music polls.

Morello believes relaxation is the key to any technique. He explains, “It’s just a matter natural body movement.” Your thumb should be relaxed so that your thumb doesn’t rub against your first finger. Also, your wrist shouldn’t be bent at an unusual angle. The stick rests in your hand in a natural position. You should be able hear the wood stick’s ring when you strike the practice pad. The drum can pick up the sound of the wood stick being choked. Relaxation and letting the sticks do the majority of the work is the key to the whole thing.

Morello emphasizes that “technique is only a tool to achieve a goal.” Morello emphasizes that the more you control the instrument, the more confident you will feel and the easier it will be to communicate your ideas. It’s not enough to be skilled in technique. You can’t just play fast enough to machine-gun everyone to death. Technique is only useful if it can be used musically.

Joe Morello has lived that ideal throughout his career. He has achieved renown for his technique and musicality and has inspired generations of players by his example of never giving up on excellence.

He says that he is sure that there are people who don’t agree with his playing, and there are others who believe I’m the best thing to ever happen. This is what makes this art so special. It would be boring if everyone did the same thing. Only one record would be required.

“I have heard it said that a drummer swings better than another. “Swing” and “feel” are two different things. There are many ways to swing. It is a feeling you feel inside that you can project through the drums.

“I’m not the ultimate and only know-all about the drums. There is so much out there that I don’t understand, but I try to make the best of it. It’s important to be original. Text contributed by users is licensed under the Creative Commons By–SA License. It may also be available under GNU FDL.