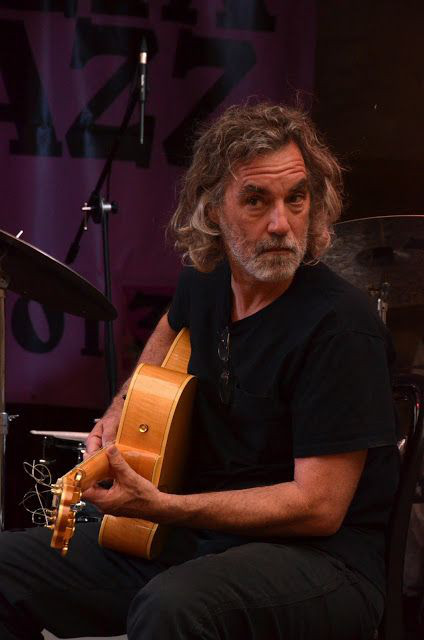 JOE MORRIS was a New Haven, Connecticut native. He was born on September 13, 1955. He began lessons on the trumpet at the age of 12. At the age of 14, he began playing guitar. Later that year, he played his first professional gig. He is self-taught, with the exception of a few lessons. He was influenced by Jimi Hendrix, and other guitarists from that time. He decided to learn the blues. His sister soon gave him a copy John Coltrane’s OM. This inspired him to study Jazz and New Music. He attended The Unschool from age 15 to 17, a student-run alternative highschool near Yale University. He took advantage of The Unschool’s open learning environment and spent his days and nights playing music with fellow students, listening to classical, blues and ethnic music at the library, as well as attending various recitals and concerts on Yale campus. From the age of 17, he worked hard to find his own voice as a guitarist in a free jazz setting. He drew on the influences of Miles Davis and Cecil Taylor, Cecil Taylor, Thelonius Monk and Ornette Coleman, as well as the AACM, BAG and many European improvisers from the ’70s. He would later draw inspiration from traditional West African string music like Messian, Eric Dolphy and Jimmy Lyons as well as Eric Dolphy, Jimmy Lyons and Fred Hopkins. After high school, he was a member of rock bands and rehearsed with jazz bands. He also played completely improvised music until 1975, when he moved from Boston to Boston. He was active in the Boston creative music scene from 1975 to 1978 as both a soloist and in various ensembles, from duos through large ensembles. In 1977, he composed the music for his first trio. He traveled to Europe in 1980, where he performed in Holland and Belgium. He returned to Boston in 1980 and helped organize the Boston Improvisers Group, (BIG), with other musicians. Through various arrangements, BIG produced two festivals over the next few years and many concerts. He started his own record label, Riti, in 1981 and recorded his first LpWraparound. It featured a trio that included Sebastian Steinberg on bass, Laurence Cook on drums, and Laurence Cook as drummer. Riti Records released four more CDs and LPs before 1991. Also in 1981 he began what would be a six year collaboration with the multi-instrumentalist Lowell Davidson, performing with him in a trio and a duo. He performed with several groups in Boston over the next few years, including Andrew Cyrille and Peter Kowald, Joe McPhee and Malcolm Goldstein. He lived in New York City between 1987 and 1989, where he performed at various venues including the Shuttle Theater, Club Chandelier (Visiones), Inroads, Greenwich House, Greenwich House, and Club Chandelier). He also performed with his trio at Tea and Comprovisation, the Knitting Factory’s first festival. He returned to Boston in 1989. He recorded and performed with his electric trio Sweatshop, and the electric quartet Racket Club between 1989 and 1993. He was the first guitarist to record his own session with Black Saint/Soulnote Records in 1994, recording Symbolic Gesture. He has recorded for ECM, Hat Hut and Leo as well as OmniTone, Avant, OmniTone, OmniTone, OmniTone, and OmniTone since 1994. He has toured the U.S., Canada, and Europe solo as well as as a leader of a trio or quartet. Since 1993 he has recorded and/or performed with among others; Matthew Shipp, William Parker, Joe and Mat Maneri, Rob Brown, Raphe Malik, Ivo Pearlman, Borah Bergman, Andrea Parkins, Whit Dickey, Ken Vandermark, DKV Trio, Karen Borca, Eugene Chadborne, Susie Ibarra, Hession/Wilkinson/Fell, Roy Campbell Jr., John Butcher, Aaly Trio, Hamid Drake, Fully Celebrated Orchestra and others. Since 2000, he has been playing acoustic basses. He has recorded with Steve Lantner and cellist Whit Dickey. He has conducted workshops and lectured across the US and Europe. He was a Tufts University Extension College faculty member, and is currently a New England Conservatory faculty member in the jazz andimprovisation department. He was nominated for Best Guitarist of 2002 and 1998 at the New York Jazz Awards (www.joemorris.com).