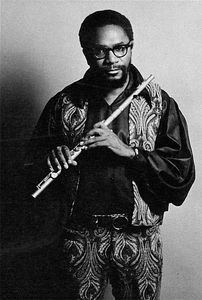 This artist was one of four jazz horn players named Joe Thomas. His brief career can be described as a symposium on funky flute. His huffing and puffing was not limited to the flautists who played over the strong backbeats of the ’70s or ’80s. Other notable players from this era included Herbie Mann and Jeremy Steig. Thomas’ masterpiece in this genre could be called “Funky Fever”, more than ten minutes worth of jamming, which has been described as “jazzy funk boogie boogie” and includes a vocal chorus singing “I’ve got this funky funky fever!” Thomas enjoyed a fair amount of success with his series of albums under his own name. They debuted in 1975 and concluded five years later, after more than a dozen sides. Thomas’s music has a surprising range of inspiring themes, which is quite impressive compared to other artists. Masada was his first disco-jazz instrumental set. It was named after one of the most tragic events in Jewish history. A whole town committed suicide instead of being captured by the Romans. Thomas’s hit “Plato’s Retreat” was released a few years later. This song is also from the album. He was paying tribute to an orgies-focused club in New York City. Thomas was a great composer and arranger. He worked for many indie R