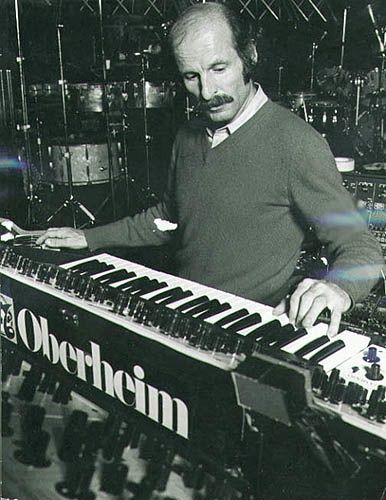 Austrian jazz and keyboard player. Born 7 July 1932 in Vienna (Austria); died 11 September 2007 in Vienna (Austria), at the age of 75. From discogs A great jazz pianist/keyboardist who collaborated with Miles Davis and Cannonball Adderley. Joe Zawinul was a unique individual. He was a European native to the Vienna classical music tradition who learned to swing as freely and as freely as any American jazzer. His hunger for change and growth never ceased. Zawinul’s curiosity, openness and willingness to listen to different sounds made him one the main driving forces behind electronic jazz-rock’s rise in the late 1960s and 1970s. Later, Zawinul would almost be the only person who explored fusions of jazz-rock with ethnic music from around the world. He was among a few synthesizer users who had actually learned to use the instrument to create expressive and swinging sounds. Before the invention of portable synthesizers, Zawinul was a leading light in bringing the Wurlitzer and Fender Rhodes electric keyboards into jazz’ mainstream. Zawinul was also a prominent composer. His music ranged from simple hits to complex symphonic jazz canvases, just like his idol Duke Ellington. He preferred to record his compositions on tape, even though he was a classical musician. Josef Erich Zawinul began playing the accordion at six years old in Austria. He continued his studies at the Vienna Conservatory in composition and classical piano. After being influenced initially by George Shearing, Erroll Garner and others, he became interested in jazz piano and was offered jobs in 1952 with Hans Koller, an Austrian saxophonist, and gigs in France and Germany with his own trio. After winning a Berklee scholarship, he immigrated to the United States in 1958. However, after only one week of class, he decided to leave to join Maynard Ferguson’s group for eight months. This is where Miles Davis was first to notice him. After a brief stint with Slide Hampton, Zawinul was Dinah Washington’s piano player from 1959 to 1961. He then spent a month playing with Harry “Sweets”, Edison before Cannonball Adderley selected him to play the piano in his quintet. Zawinul was there for nine years and flourished, contributing many compositions to the Adderley book, including the popular pop song “Mercy, Mercy, Mercy,” and “Country Preacher”. He also helped to lead the Adderley group into electronic era. Zawinul’s career with Adderley saw him evolve from a hard-bop pianist to a soul jazz performer, becoming a master of the electric piano and eventually a jazz-rock pioneer. He was in the forefront of jazz-rock’s new scene at the time of his Adderley gig (1969-1970). He recorded several groundbreaking records with Miles Davis and contributed the title song to Davis’ In a Silent Way. After recording his self-titled solo album in Adderley, Zawinul moved to Weather Report with Wayne Shorter (bassist) and Miroslav Vitous (drums). This was in November 1970. Weather Report provided a platform for the self-confident Zawinul to grow and develop his passion for propulsive grooves, music from Africa and Middle East, and he was able to continue being himself. He eventually gave up the electric piano to embrace a variety of sophisticated synthesizers. This enabled him to master the instruments at levels that were unimaginable for those who thought they were unfeeling, sterile machines. Weather Report became a well-known group that was popular beyond jazz and progressive rock. This is due in large part to Zawinul’s hit song “Birdland”. In 1985, Zawinul and Shorter ended their relationship. Zawinul began to tour alone, surrounded only by keyboards and rhythm machines. However, Weather Report was revived in the next year with Weather Update, which did not record any performances. Weather Update was quickly transformed into the Zawinul Syndicate. This group leaned more toward world music and grooves over the course of a decade. Zawinul was rekindled interest in European roots. He collaborated with Friedrich Gulda, a fellow Viennese classical pianist, from 1987 to 1994 to produce Stories of the Danube in 1993. After the devastating Malibu fires of 1994 he moved from California to New York City to be closer to Europe. Faces was released in 2002.