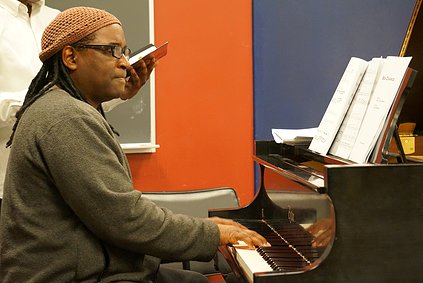 Joel LaRue Smith seamlessly moves between the various styles of jazz and the rich and varied literature from the classical masters. He is one of those rare and gifted pianists who has never had to choose. They are both the same. His musical talent, musical artistry and intuitive understanding of each composer speak directly to his listeners. They are invited to share a personal, exhilarating, and unique musical experience regardless of genre. It is important to understand the musical roots that led to his ability as a fluent translator of both idioms. Joel was born in New York City and is one of ten siblings. He began playing piano at the age of five. After waiting patiently for his chance for formal training, he began piano lessons at eight years old. He displayed such talent and discipline, that he was admitted to The High School of Performing Arts in New York City at fourteen. After graduating from City College of New York, he continued his studies at City College of New York in composition, arranging and piano. He also received a Bachelor of Arts degree. He was then admitted to Manhattan School of Music where he earned his Masters of Music. He was always looking for more knowledge and understanding of his craft and enrolled in independent study with Jaki Byard and Barry Harris. Joel’s ability to play piano is rooted in his deep understanding of music’s architecture. He is a composer and arranger who strives to reinvent the musical experience. To capture the cultural richness and emotional essence of his playing, he looks into his cultural roots as well as those he has adopted. Joel’s playing is alive at every moment, whether he delights listeners with complex Jazz harmonies and rhythmic patterns from Afro-Cuban, or amazes them with his technical brilliance, exquisite phrasing and deep knowledge of all the classical genres. He weaves unique musical elements into every project he creates as a composer and arranger. He creates a sound that is full of unexpected delights, imagination and playfulness. Joel is an expert in jazz and classical music, but his ability to communicate the inner workings within each language’s dialectical nuances sets him apart. His listeners are invited to not only hear, but to also feel the intent of the composer at the time of musical creation. His gift, hard work and love for his art are evident in his ability to seamlessly cross both musical worlds. Joel has toured extensively in the U.S., Europe and Africa, Asia, Central America and the Caribbean. He has performed at Symphony Hall in San Francisco and Symphony Hall in Boston as well as at The Whitney Museum, The Whitney Museum and The White House. Joel has shared the stage with outstanding musicians such as Kenny Burrell and Junior Cook. Joel’s original compositions were presented in concert halls and cathedrals throughout Tuscany, Italy in 1993. Participation in multi-cultural festivals includes The Salem Jazz and Soul Festival and The Cambridge River Festival. He also participated in the Guatemala Jazz Festival and Costa Rica Jazz Festival. He has been a regular performer at jazz clubs like the Blue Note in New York City, The Top of the Hub, Jazz Dock, Prague, and the Blue Frog, Mumbai. Joel’s debut CD “September’s Child” was released in 2009. It was received standing ovation by a wide audience. Joel was the featured arranger and pianist at the Annual John Coltrane memorial concert in Boston, October 2011. Joel was named Cultural Envoy to U.S Embassy in Costa Rica in 2013. from http://joellaruesmith.com