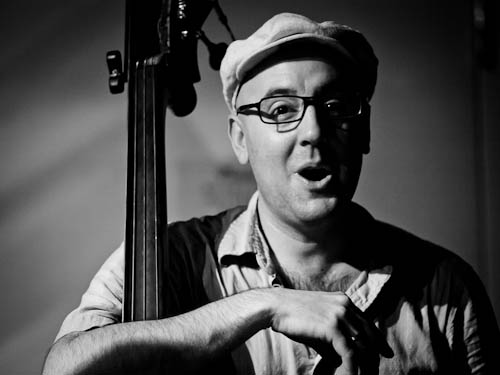 John Hebert, bassist was born in New Orleans, Louisiana. He first started double bass lessons with Bill Huntington. John received a full scholarship to Loyola University of New Orleans. After performing for two years with some of New Orleans’ greatest musicians and performing at many clubs, including the New Orleans Jazz and Heritage Festival, John moved to New York to attend William Paterson University. There he received a Bachelor in Music in Jazz Performance and continued his studies with Rufus Reid. John has been a New York City resident since then and is highly sought-after as a bass player. He has performed alongside world-famous artists like Andrew Hill, Lee Konitz and Paul Bley. Byzantine Monkey is his own band and he has been highly praised for his unique playing style and compositions. He was also named in Downbeat’s 2007, 2007 and 2008 Critics Poll “Rising Star Acoustic bassist”. John was a member of various ensembles with Andrew Hill from 2001 to his death in 2007. Andrew Hill’s latest Blue Note album, “Time Lines”, features John. This Blue Note album was named “Record Of The Year” by Downbeat Jazz Critics Poll 2006. John has performed at many festivals around the globe, including the North Sea Jazz Festival (Tampere Jazz Festival), Montreal Jazz Festivals, Tampere Jazz Festivals, Montreal Jazz Festivals, Moers Jazz Festivals, Ear Shot Jazz Festivals, San Francisco Jazz Festivals, and many other. You can hear him at some of New York City’s most prestigious venues, including The Village Vanguard and Blue Note, The Jazz Standard and Birdland. from www.whirlwindrecordings.com