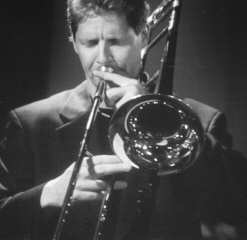 John Hines is one of the top trombone professionals in and around the Denver area for the past ten years, and is now achieving recognition beyond his home market. “Hines plays his ax with prime advanced harmonic ideas, certainly with liquid phrasing, & an attendant voice-like, yet abstract sound. His robust & bright sonority interacts with ease with his group as he deftly weaves his wonderful web of solo artistry.” — George w. Carroll, The Musician’s Ombudsman, April 2004. After studying under Ray Smith (Brigham Young University) in Provo, Utah, he played with the internationally known big band, Synthesis, including opening for Gerry Mulligan’s big band at the 1988 Montreux Jazz Festival, and for Carlos Santana at the 1988 Antibes Jazz Festival outside Monte Carlo, France. After building a successful career in advertising and technology marketing, he picked up his playing pace when he moved to Denver in 1993. While still doing it on the side, he plays professionally for several orchestral and jazz groups in and around the Denver area, including frequent performances with his own John Hines Quintet/Table for Five. He plays regularly with many of the local bands, including the acclaimed What’s Cookin’? Big Band, the O-Tones Brass Band, The Metropolitan Jazz Orchestra, and various salsa and show bands. He played for the 2003 Colorado Chorale performance of ‘The Secret Garden,’ and enjoys playing and composing for music theater. He was an active supporter of the Colorado Jazz Workshop for several years, primarily under the tutelage of trumpet virtuoso Hugh Ragin, and is involved with several efforts to bring more jazz to Denver. In 2004, John was signed to the Capri Records label, and released his first major CD, ‘In The Pocket,’ which was met with significant critical acclaim. The title song, an original by Hines, is currently a finalist in the 2005 International Songwriter Competition in the Jazz category. John was also a featured ensemble player and soloist on the 2005 CD release, ‘Pag’s Groove,’ by composer/arranger/pianist Michael Pagan (also under the Capri Records label). In November, 2005, John was selected to perform with the KUVO 20th Anniversary All-Star band, with Hugh Ragin, Paul Romaine, Phil Urso, Kenny Walker, Eric Gunnison, and others, which opened for visiting artist Marian McPartland. His playing has been described as being a mix of Curtis Fuller and Steve Turre, but with an almost “vocal quality” that makes him easy to listen to. According to Ann Braithwaite: “Hines’ trombone voice is striking in its tonal clarity, and he never succumbs to mawkishness. Hines has an attractive musical personality that’s shaped by familiarity with his instrument in the jazz past and present. His articulate lines suggest those of Curtis Fuller, the renowned Jazz Messenger and Count Basie sideman, in their pleasing melodic disposition. Hines’s musical ideas draw on swing and bebop but also on jazz from present times; contemporary trombonists Steve Turre and Robin Eubanks would join older players Slide Hampton and Bob Brookmeyer in approving of what results from his creative thought. The colors and accents Hines tucks into the flow of each of [his] tracks keep the flow of the music constantly riveting to the ears. Glad to say, first-rate musicianship goes hand in hand with the carefully managed emotion at the core of his playing.” Recently, John has been performing regularly with the Franz Roehmann Big Band, an absolutely amazing collection of musicians which play every fourth Tuesday at El Chapultepec Too, 3930 West 38th Avenue Denver, CO. Playing all originals and original arrangements from the esteemed band leader (Franz), this hot group has just released a second CD, ‘Together Again,’ which is available by sending to note on the ‘contact us’ portion of this site. John can be heard regularly throughout Denver with his Quintet, John Hines’ Table For Five, which is a strong, accessible ensemble consisting of Trombone, Trumpet, Piano, Bass & Drums, and featuring the talented and beautiful Donna DeVine on vocals. Performances are listed on the ‘Calendar’ portion of this site. from www.johnhines.net