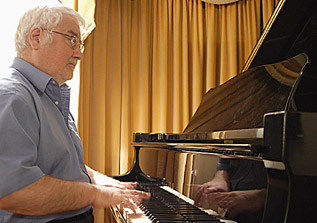 John is a highly respected pianist and composer who has earned a formidable reputation on the British jazz scene over many years. His credentials as a musician are as impeccable as they are diverse. He started studying at the Royal Academy of Music at the precocious age of sixteen. He acquired his LRAM. Unlike today, Jazz was not valued or studied at the Academy, so he didn’t find himself launched onto the jazz scene at an early age. But his abilities were acknowledged by the Royal Academy at a later stage when he was made an ARAM for services to music! The route to success was through pub gigs and appearances on BBC’s Jazz Club, funded by work as a successful session musician. As his reputation grew he found himself increasingly supporting American jazz stars, such as Bob Brookmeyer, Clark Terry, Zoot Sims, Al Cohn, Art Farmer, Pepper Adams, Bud Shank, and Shorty Rodgers. One of the most memorable of these events was working with Chet Baker for a week at The Canteen in Great Queen Street. He worked closely with Pete King, Tommy Whittle, Tony Coe and the late great Ronnie Ross for many years, playing regularly in their groups and recording with them. For the last twenty years he has been first pianist to Sir John Dankworth and Dame Cleo Laine. His most recent accolade was Critics choice Jazz pianist of the year 2002. Finally in 1993 he started making his own recordings, highlighting his own compositions alongside his favourite standard tunes. The first recording was Lost Keys recorded with Jeff Clyne and Trevor Tomkins in 1993. The most recent is the new Modern Jazz Trio album with Sam Burgess and Mike Smith – The Key to it All released by Divingduck Records in April 2007 from www.johnhorler.co.uk