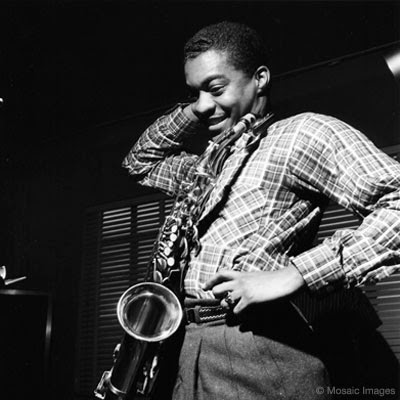 John Jenkins, born January 3, 1931 and died July 12, 1993. He was an American jazz saxophonist. Jenkins began his high school education with clarinet, but he switched to saxophone six months later. From 1949 to 1956, he participated in Roosevelt College’s jam sessions. Art Farmer was his friend in 1955, and he later led his own Chicago group. He recorded two albums with Charles Mingus as a leader in 1957. In the 1950s and 1960s, he was a sideman for Donald Byrd and Hank Mobley and Paul Quinichette. Clifford Jordan and Sahib Shihab were his other musicians. He essentially stopped playing music after 1962. Gloria Coleman did a few dates. He worked in New York as a messenger and also dabbled with jewelry. In the 1970s, he sold brass objects at street markets. He began to practice again after 1983 and started playing on the streets. Clifford Jordan was his last friend shortly before his death. from http://en.wikipedia.org