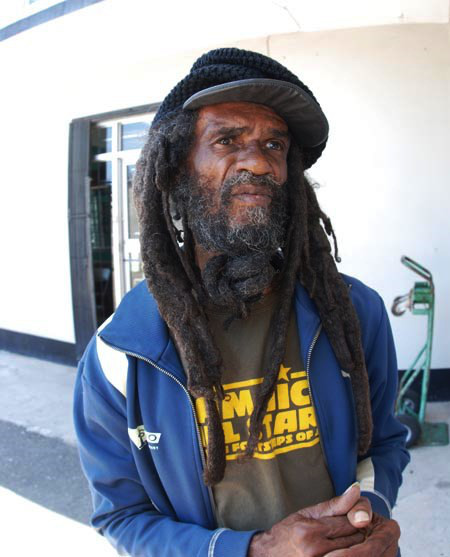 John Arlington “Dizzy”, trumpeter, was born October 5, 1938 and died August 16, 2008. Johnny “Dizzy”, Moore, who died at 69, had been battling colon cancer for many years. He was one of Jamaica’s most well-known trumpeters. He was a founding member and backer of the Skatalites (Jamaica’s top session band in the 1960s), and helped to create ska. Moore was born in Kingston and was raised in a Seventh Day Adventist family. Moore’s early interest in music inspired him to create rudimentary instruments from pumpkin vines and papaya stalks. Moore decided to attend Alpha despite the stigma attached to the school’s students after he discovered that his neighbor was a drummer. Many Alpha boarders were street urchins or orphans. Moore was able to gain admission by pretending to be in control so that his parents would not object to the school’s Catholic foundation. He studied electrical engineering and printing at Alpha. There he became close with his fellow students, Don Drummond, who quickly emerged as the nation’s best trombonist and Lester Sterling, who was a prominent alto saxophonist. Moore was a member of the Jamaica Military Band after he graduated in 1955. However, he was fired for refusing to shave and playing bebop. After he was fired from a jazz orchestra in the Uptown, Moore rejoined. However, he refused to cut his hair. He was discriminated against for his Rastafarian beliefs and he fled to Count Ossie’s Rasta camp where he participated in late-night jam sessions that helped to create ska. This happened as Jamaica was trying to break free from Britain’s colonial yoke. Register for Sleeve Notes to receive music news, bold reviews, and unexpected extras. Moore was spotted by Clement Dodd, the founder of Studio One. Moore and his peers were often featured on Dodd’s early 1960s recording sessions. In 1964, Dodd formed a ska supergroup. This group included Moore, Drummond, and Sterling. Also, Lloyd Knibb, Lloyd Brevett, Jerome “Jah Jerry”, Haynes, and Tommy McCook, the saxophonists Roland Alphonso (and drummer), were all gone. The Skatalites were named after a newly-launched satellite by Sputnik. Although they were together only for 14 months, the group changed Jamaican music’s shape as the chief promoters of ska. They supported all of the top artists of the day like Toots and the Maytals, Alton Ellis, Owen Gray, and Tommy McCook. Skatalites instrumentals like Tear Up and Guns of Navarone made it to the top of the Jamaican charts. Moore’s intricate soloing was also a major feature of many songs, including Nimrod, Dick Tracy and Ringo. This song was Justin Yap’s last cut. McCook, Knibb, and Alphonso left the Skatalites to form the Supersonics. Mittoo, Alphonso, and Moore remained at Studio One to continue their tour of Britain in 1967 with Ken Boothe. Moore returned to Jamaica where he briefly played in the Uptown Club act Kes Chin and the Souvenirs. He then joined the Supersonics and helped to establish the rock steady style at Treasure Isle. However, the Supersonics disbanded after a tour through Canada and Moore began to rely more on session work. Moore, who was less active since the mid-1970s joined the Skatalites in 1983 to perform at Reggae Sunsplash. He also contributed to the album Return of the Big Guns the next year. The group supported Bunny Wailer in 1989 on an international tour. They began touring in 1990 as the Skatalites. Moore was unable to travel with them as most of their members lived in New York. However, he did later join the Jamaica All Stars along Justin Hinds. Many of his children, grandchildren, and great-grandchildren are still with him. From www.theguardian.com