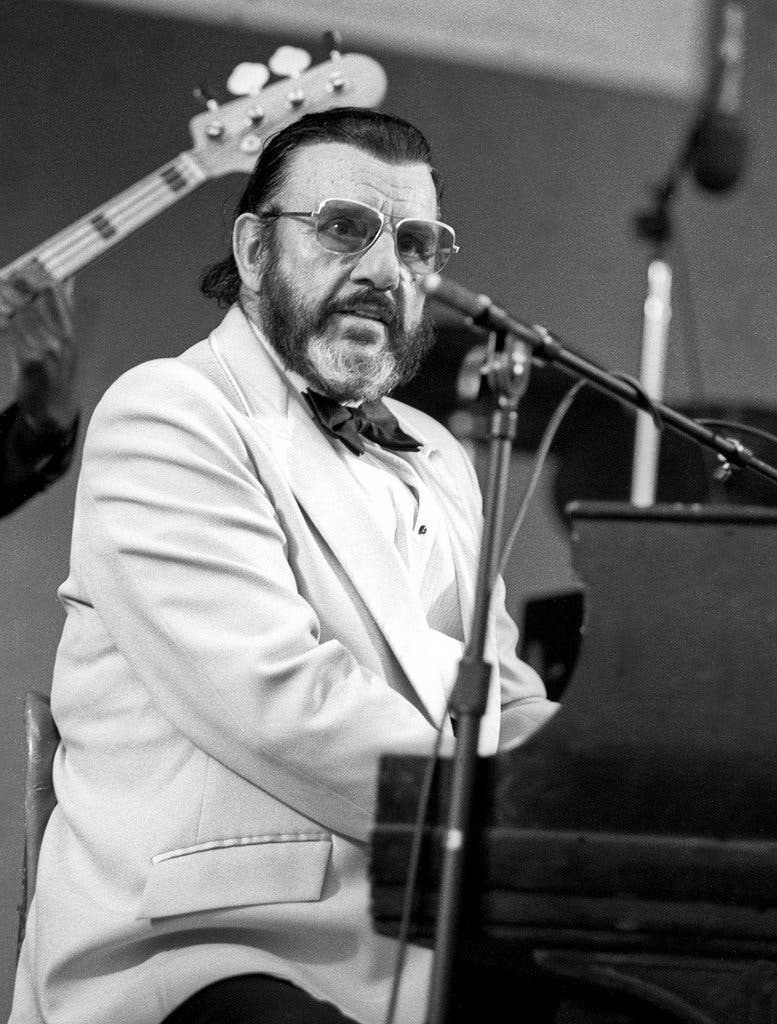 Over a lifetime that spanned more than 50 years, Johnny Otis modelled a remarkable variety of musical hats. Otis was a bandleader, record producer and talent scout. He also owned a label, was a nightclub impresario, disc jockey and host of TV variety shows. He was also an author, R&B pioneer, and rock & roll singer. This is not bad for a Greek American who loved R&B and jazz so much that he adopted the African American culture.
John Veliotes, a Californian-born musician, changed his name to Otis in his teens. He was a drummer from his youth. He played in the Oakland-based orchestra of Otis Matthews. He also enjoyed swinging with various Midwestern outfits. In the mid-’40s, he settled in Los Angeles and joined Harlan Leonard’s Rockets.

Otis was soon asked by the owner of Alabam to form his own orchestra for house-band duties. Excelsior’s 1945 debut sides were solidly in big-band jazz and featured a moody arrangement of “Harlem Nocturne”. Two tracks were performed by Shouter Jimmy Rushing. Otis was gaining popularity as a drummer; he supported Wynonie Harp and Charles Brown (with Johnny Moore’s Three Blazers) in the same year.

Otis continued to record for Excelsior until 1947, with Big Jay McNeely as the saxophonist on one occasion. But his impact on L.A.’s R&B scene skyrocketed when he and Bardu Ali opened The Barrelhouse Club in Watts. R&B was Otis’ new favorite genre. He cut down the big band and found young talent like the Robins, Little Esther Phillips and Mel Walker, as well as Pete Lewis, who would be a great asset to him in the years ahead.

In 1949, Otis signed with Newark-based Savoy Records. The R&B hits were in great supply: “Double Crossing Blues”, “Mistrustin’ Blues” and “Cupid’s Boogie”, all of which reached number one. Otis also scored ten Top Ten hits that year! “Gee Baby”, “Mambo Boogie” and “All Nite Long”, lit up the stage in 1951. “Sunset to Dawn”, his remarkable run in 1952, was capped by Esther, Walker and other members. Otis was now able to do vibes on many waxings.

Otis made the move to Mercury in late 1951. However, other than a Walker-led version Floyd Dixon’s “Call Operator 210”, nothing was a big hit with the public. The 1953-1955 Peacock logo contract produced some nice jump-blues sides, but no hits. Otis orchestra supported Big Mama Thornton on her chart-topping song “Hound Dog” while at Peacock, as did Little Richard. Otis was a skilled talent scout. He produced the hit “Roll with Me Henry”, Jackie Wilson, Little Willie John and Hank Ballard.

Otis started Dig Records in 1955 to promote his work and those of his new discoveries, including Mel Williams, Tony Allen, Arthur Lee Maye & the Crowns and Tony Allen. Rock & roll was at its zenith in 1957 when the multi-instrumentalist signed on with Capitol Records; billed as the Johnny Otis Show, he set the R&B and pop charts ablaze in 1958 with his shave-and-a-haircut beat, “Willie and the Hand Jive,” taking the vocal himself (other singers then with the Otis Show included Mel Williams and the gargantuan Marie Adams & the Three Tons of Joy). Otis hosted his own variety show on L.A. TV in the late ’50s. He starred his entire cast (including Lionel Hampton on one episode) and was a guest star in Juke Box Rhythm, a 1958 movie.

Otis was a great performer for Capitol, but he only had one hit. Otis then left King Records in 1961-1962. Otis later recorded some joke material for Kent, and watched his son Shuggie build a reputable reputation as a blues guitar player while recording for Columbia. In 1982, father and son recorded an album for Alligator that was appropriately titled The New Johnny Otis Show.

Otis, a multi-talented man with many talents, later added the operation of a California health-food shop to his long list of diverse accomplishments. In 1994, he was inducted into the Rock and Roll Hall of Fame. Otis, who was 90 years old, died in Altadena in California on January 2, 2012. Johnny Otis, if blues had ever been able to boast a renaissanceman among its ranks was it.