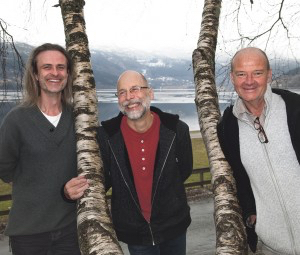 “Jokleba!” : Per Jorgensen, Jon Balke and Audun Kleive. The group was formed in 1990 and quickly became one of the most unpredictable and exciting groups on the Scandinavian music scene. Jokleba uses composed material that has been incorporated in improvisational techniques to create music that can be reinterpreted in any way that suits the mood. It can be melodic, textural, rythmic, arythmic or abstract, concrete to yellow, warm to cold, and even icy. Jokleba was on a “timeout” in 2005, but returned to Vossajazz spring 2011, when he released double CD Jokleba/Nu Jok. PER JORGENSEN- Vocal, Trumpet, PercUssion, Flute, etc. – Born 9 sept 1952. A highly respected musician, wherever he performs. His use of his various talents makes him a musical magician who delights the audience every time he performs. He has performed with many Scandinavian musicians, including Pierre Dorge, Marilyn Mazur and Jack Bruce. AUDUN KLEIVE, Percussion – Born 20 October 1961. Quickly established himself among the top Scandinavian drummers. He is the founder of “Siwan”, a cross-cultural percussion ensemble with musicians from the Arab world and European baroque players. In 2007 he founded “Siwan” a cross-cultural ensemble with musicians from the Arab world and baroque players from Europe from http://www.jokleba.no