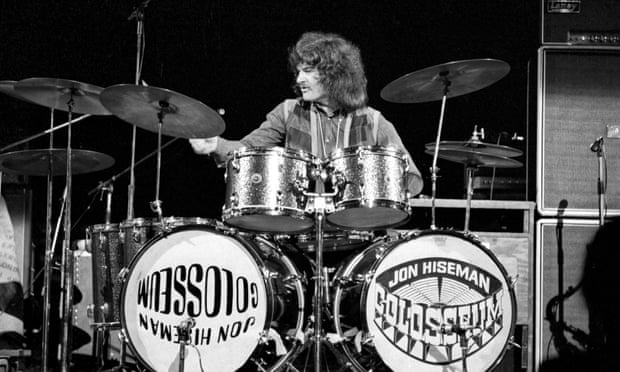 Philip John “Jon” Hiseman (21 June 1944 – 12 June 2018) was an English drummer, recording engineer, record producer and music publisher. In the mid-1960s Hiseman played in sessions such as the early Arthur Brown single, “Devil’s Grip”. In 1966 he replaced Ginger Baker in the Graham Bond Organisation and also played for a brief spell with Georgie Fame and the Blue Flames. He then joined John Mayall & the Bluesbreakers in 1968 playing on the iconic album Bare Wires. In April 1968 he left to form what has been critically claimed as the “seminal” jazz rock/progressive rock band, Colosseum. Colosseum disbanded in November 1971, although Hiseman later formed Colosseum II with Don Airey and Gary Moore in 1975. Between these two versions of Colosseum, Hiseman formed the band Tempest with Allan Holdsworth, Paul Williams and Colosseum bandmate Mark Clarke. Ollie Halsall joined the band temporarily making the band a quintet but Holdsworth left the group along with Williams, leaving Halsall to handle all guitar and vocal duties. Hiseman subsequently played in jazz groups, notably with his wife, saxophonist Barbara Thompson, with whom he recorded and produced fifteen currently available albums. Andrew Lloyd Webber, searching for a “sound” for an album to feature his brother Julian on cello, stumbled upon Colosseum II by accident and imported the whole band into his “Variations” project. This was the start of a ten-year relationship with Hiseman, whose drumming features on recordings, TV specials and musicals. In 1982 Hiseman built what was at the time a state-of-the-art recording studio next to his home, and together with the compositional skills of Barbara Thompson produced many recordings for film and television soundtracks. Hiseman was a founding member of the United Jazz and Rock Ensemble, a German-based “Band of Band Leaders”, along with Barbara Thompson. Colosseum reunited in June 1994 with the same line-up of musicians as when they broke up 23 years earlier. They played the Freiburg Zelt Musik Festival and followed it up with a German TV Special (WDR Cologne) in October, which was recorded and released as a CD and a VHS video; a DVD version followed in 2003. Several new studio releases also followed, as well as expanded editions of Valentyne Suite and Colosseum Live, plus several compilation boxed sets. Barbara Thompson joined the band on various occasions before the death of Dick Heckstall-Smith in 2004 and has been since a permanent member of the band. Colosseum played its farewell concert on the 28th of February in 2015. In October 2010, a biography of Jon Hiseman, entitled Playing the Band, was published. It was written by Martyn Hanson and edited by original Colosseum manager, Colin Richardson. In 2017 Jon Hiseman formed a new trio band called JCM. The band recorded an album “Heroes” late in 2017 and it was released in April 2018. JCM began touring on 7 April 2018. Other members are guitarist/vocalist Clem Clempson and bass player/vocalist Mark Clarke. In May 2018, Hiseman’s family reported that he was struggling with a brain tumor. He died at age 73 on 12 June 2018. He was 9 days short of his 74th birthday. from wikipedia