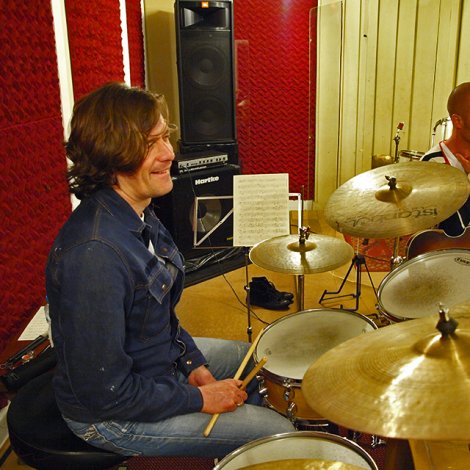 Drummer Jonas Johansen (b. The greatest European jazz drummers are Jonas Johansen (b. 1962, Copenhagen, Denmark). Jonas, who was raised in Elsinore, Denmark’s creative environment, studied with Ed Thigpen 1978-1985 and Bent Lylloff 1976-1978. He also studied at The Dick Grove School of Music Los Angeles 1985-1986 with Peter Donald, David Garibaldi, and Luis Conte. He studied with Alex Riel at The Rhythmic Music Conservatory, Copenhagen, from 1987 to 1989. He was one of the most popular young jazz drummers in Denmark from 1987 to 1990. Jonas was the drummer for The Danish Radio Big Band (now DR Big Band), where he remained until 1999. During those years, the band worked with jazz legends such as McCoy Tyner and Joe Henderson. He left the DRBB to focus on his freelance career in 1999. Jonas, along with Fredrik Lundin, formed “Move”, his own band, in 1992. It is still in existence and has released three albums. Jonas began working with Niels Henning Oersted Perdersen, a world-renowned Danish bassist. From 1993, Jonas was a permanent member the NHOP trio with Ulf Wakenius, a Swedish guitarist, from 1996 to NHOP’s demise in April 2005. Jonas is co-leader of a trio with Steve Swallow, a world-famous electric bass player, and Hans Ulrik, a Danish saxophone expert. The trio has released three albums to date. The latest, “Believe In Spring”, is from 2007, and features the Swedish jazz stars Bobo Stenson (Swedish) and Ulf Wakenius (Swedish). Jonas is currently working with some of the top ensembles, including Joakim Milder’s Katrine Madsen Group, Groove Factor with Ulf Wakenius and Jacob Christofferen Trio. He also has his own bands. He has played with many artists and groups, including Chano Dominguez. Eliane Elias. Egberto Gismonti. Johnny Griffin. Toninho Horta. Marc Johnson. Marc Johnson. Airto Moreira. Doug Raney. Renee Rosnes. Phil Woods. Monica Zetterlund. Pierre Doerge.