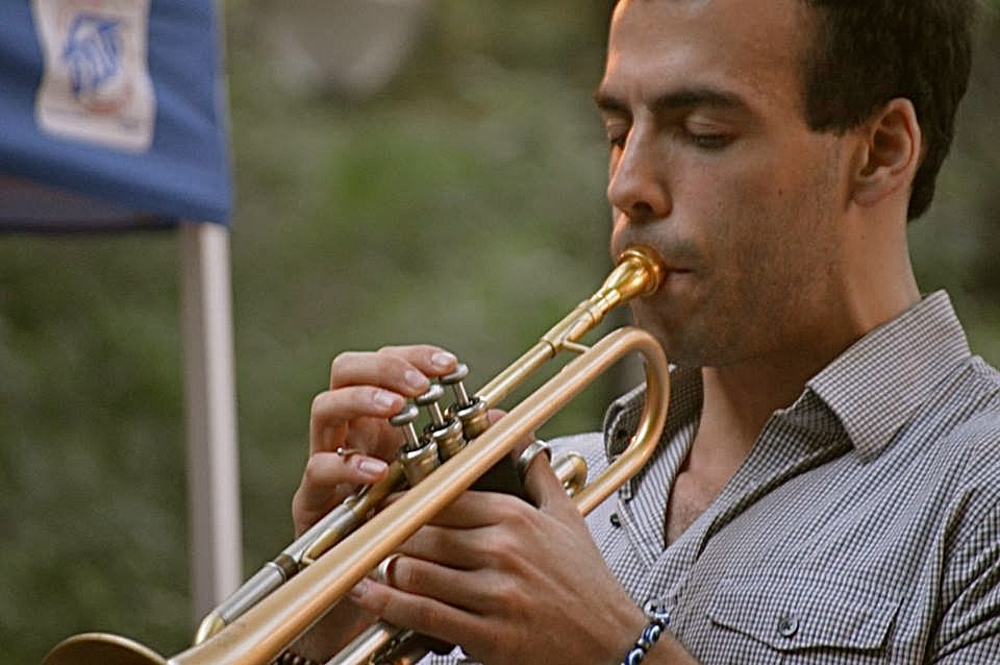 Manhattan, NYC native, trumpeter and composer Jonathan Saraga has been said by All About Jazz to possess the musical “wisdom and maturity of veterans more than twice his age,” and that “his chops, lust for musical life and don’t-box-me-into-a-stylistic-corner mentality make him seem like the musical offspring of trumpeters Dave Douglas and Ambrose Akinmusire.” Jonathan’s professional career in music began in 2002, when he was made an orchestral trumpeter for the Paramount film, Changing Lanes. He would also begin performing with the Jazz Standard (NYC), Youth (jazz), Orchestra that same year. After receiving the Fred Mazart Music award in 2005, Jonathan Saraga won the 2007 International Trumpet Guild Jazz Solo Competition. Shortly after completing his Bachelor of Music degree, he was again a finalist in the 2009 Carmine Caruso International Jazz Trumpet Competition. Saraga was also selected from an international pool of trumpeters to take part in the School for Improvisational Music’s summer intensive program. This was just after he finished his graduate school. Jonathan was one of two applicants for the 2014 Juilliard Artist Diploma Jazz Trumpet after he received his Master’s degree in performing arts in 2011. He was also selected to take part in the 2015 Banff Workshop in Jazz and Creative Music, an organization that is highly regarded and has international selectivity. Saraga is a well-known jazz musician in NYC. He performs as a featured musician in the Young Emerging Artists Series, the Night Artist Series at Bar Next Door, and the Emerging Players Series for Festival of New Trumpet Music. Interviews with FONT, The Trumpet Blog and We Are The Art and Pulin4Jazz have been conducted. He was also featured by Fluke Productions, London, the International Trumpet Guild and All About Jazz. Jonathan has performed original music at the Shapeshifter Lab, and Smalls, two of Down Beat’s favorite jazz clubs. His groups have performed at Seeds and Sycamore, the Douglas St. Music Collective (iBeam), the University of the Streets, among other venues. He has released two albums as a leader, Contrumplation featuring trumpeter Adam O’Farrill and First Vision featuring his quintet. First Vision features all Saraga-penned original music and All About Jazz has declared it “… a well-conceived and beautifully realized debut that recalls the hard-bopping, envelope-pushing blues of the 1960s. It has been hailed as a “…stand-up and take notice musical offering …,” by the All About Jazz team. Jim Rotondi, a world-renowned trumpeter, describes Jonathan’s performance on the album as “unique” as well as “inventive”. He also says it possesses “soul, intelligence and great technique, as well as an acute musical awareness.” All original compositions were written by Saraga. The album features “…highly imaginative playing and writing, all done with a strong ensemble concept,” Jon Gordon, an award-winning saxophonist, stated. The album has received air-play throughout the east-coast on stations like 90.3 FM the Core, Weaa 88.9, BreakThru Radio’s show the Jazz Hole, www.jamcityamerica.net, and Pulin4Jazz. The Blue Truffle Music label adopted the album and it continues to circulate. Jonathan has had small-group performances with Scott Lee, Harish Raghavan and Matt Brewer. But he has also performed his own compositions and arrangements. He’s been featured by many other ensembles including the Erica Seguine/Shannon Baker Jazz Orchestra and the U.S. Army Blues Jazz Orchestra. Helix, which he co-wrote and performed with Avishai Darash, was also recorded in Israel by Avi’s Helix Kweentet record. Jonathan is a side-man at prestigious NYC clubs like Birdland, Smoke, Smalls, Fat Cat, Dizzy’s Club Coca-Cola, and Dizzy’s Club Coca-Cola. Jonathan has also made appearances in some of the city’s larger venues, such as Carnegie Hall, Alice Tully Hall and Symphony Space. As a lead-trumpeter, he has been a regular performer on the Off-Broadway pits for shows such as Guys and Dolls and Sweet Charity, A Chorus Line, Wild Party, and Anything Goes. Saraga’s talents as a trumpet player have been heard at many jazz festivals in NY State, including Cadence and Peekskill, Rochester, Albany, Blue Note, and Albany. But his musical adventures don’t end there. Jonathan has toured the U.S. with Damn Yankees as a lead trumpeter. He also traveled throughout Panama, Haiti, France and the Caribbean Isles. Jonathan is a musician with a passion for jazz music. However, his use of sound also draws inspiration from other art forms. He has composed and orchestrated music for lyricists and provided musical accompaniment to dance classes, workshops, and performances presented by the Martha Graham Dance Academy. Jonathan’s musical talent also extends to the wellness and healthcare scene. He has been a regular performer at New Life Expo and as a musical accompaniment for art exhibitions. Jonathan continues his journey as a performer and coach younger and more experienced musicians. Jonathan continues his work as an educator at Gramercy Brass Band Camp for six years. He also leads multi-instrument ensembles at public schools in the five boroughs, as part of Afro Latin Jazz Academy of Music. He presents master-classes at private and public institutions, as well as workshops. Previous schools include Wagner Middle School and PS 126/MAT. Jonathan is currently pursuing a Doctorate of Musical Arts degree at the University of Colorado, Boulder from www.jonathansaraga.com