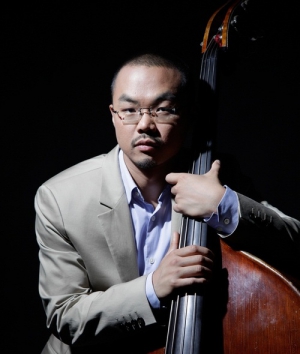 Born in Seoul, Korea, Joonsam started playing the electric bass when he was nineteen. After being exposed to Jaco Pastorious, he switched to an acoustic instrument two years later. He was influenced by Ray Brown and Paul Chambers and Christian McBride. Yeong-Seok Seong, a classical bassist in the Seoul National Symphony Orchestra, taught him and he also played in Yeon Namgung’s jazz band, which was broadcast on television, radio and in concert halls. He moved to New York City in 2007 to study at NYU. There, he was able to perform and study with Joe Lovano and Brian Lynch, Kenny Werner and Ralph Alessi, John Scofield and Wayne Krantz. After graduating from NYU, he began recording and performing in the city’s vibrant jazz and contemporary music scenes. Joonsam is currently a resident of New York. He has been fortunate to play with some of the best musicians in the city during his short stay. There are many venues where he has performed, including Jazz at Lincoln Center, Blue Note Jazz Club and Jazz at Smalls. He’s performed with many musicians and has led his own bands. from http://originarts.com