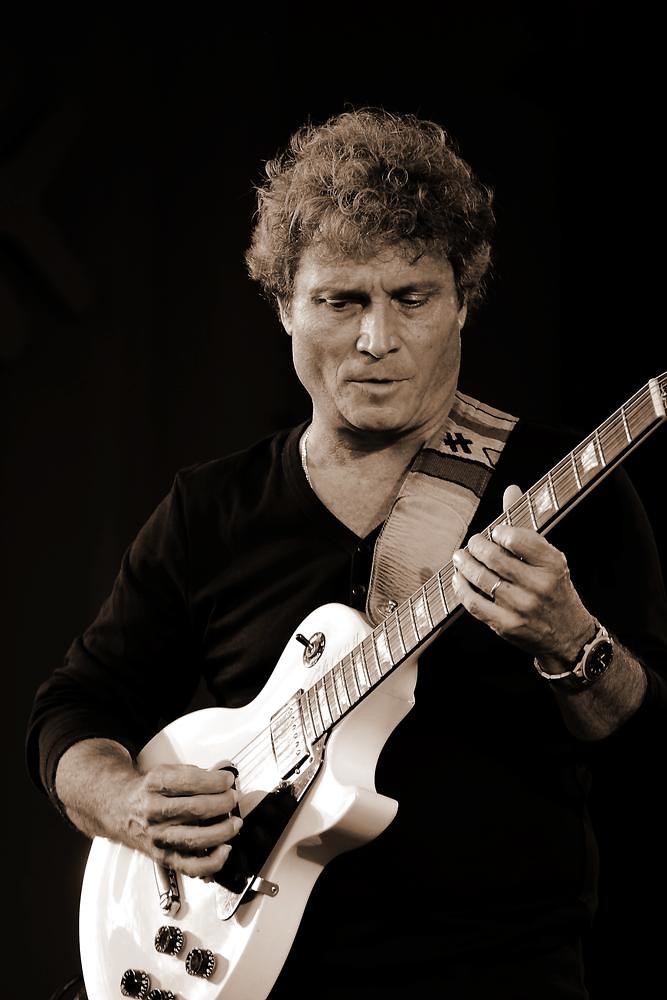 J. Chicoy was a Cuban citizen who was born in La Habana on July 28, 1955. At the age of 10 he began to play guitar, studying with several Cuban teachers. He began playing guitar at the age of 16, joining local blues and rock groups. Soon, he joined a professional band called “Los Barbas”, which was extremely popular in Cuba in the 1970s. He was also accepted to la Escuela Nacional de Instructes de Arte. Here he studied for four years. He later joined “Los 3 1”, a band that specialized in Brazilian music and Cuban music. He joined Felipe Dulzaides’ famous quintet, which he played the standard Jazz repertoire for four years. He joined the Cuban trumpeter Arturo Sandoval’s band in 1985. They worked together for six years. He was a member of the band that played at the most important Jazz festivals around the globe and shared the stage alongside music legends like Dizzy Gillespie (Cuban trumpeter), John Fadis (Juicy Fadis), Joe Pass, Wynton Maralis, Bobby McFerrin, Pucho López, Bobby McFerrin, Herbie Hancock, Bobby McFerrin, and Michel Legrand. Six albums were recorded with companies in England, Holland and Germany. He played in many prestigious Jazz Clubs, including New Morning (Paris), Ronnie Scott (London), Show Case (Chicago), Quasimodo(Berlin), and others. He also played with the Saxophone Quintet, directed by Manuel Valera u0026 Guillermo Barreto during this time. He performed with the United Nations Orchestra in 1990, under the direction of Dizzy Gillespie. The Perspectiva band was formed by Hilario Duran, the pianist. Chicoy joined the group in 1992 as a guitarist and composer. He led conferences at the Cathedral of Jazz Guitar, Rotterdam International Conservatory, as well as at Festival Jazz Plaza in La Habana during one of his final tours with Perspectiva. He began his collaboration with the renowned Cuban pianist Chucho Valdes and his band Irakere in 1997. They played in international Jazz festivals across Europe and the United States. He was a part of the 1998 CD “Cantante a Babalu Aye”, which featured Chucho Valdes and Lazaro Ros. The album was nominated to a Grammy. He won the 2004 East Coast Music Awards Canada award for the “Best Jazz Recording” category for his collaboration with Jeff Goodspeed and the band Havanafax. He continued touring the globe with Omara Portuondo in 2005 and 2006. Chicoy was invited by Omara Portuondo to take part in the International Festival of Guitars in Costa Rica. He was a member of the CD Rhythms of the World which featured artists like U2, Cold Play, Sting and Jack Johnson. He recorded a CD “Gracias” with Omara Portuondo in 2007, which was nominated for a Latin Grammy. In 2008, he recorded the second Rhythms of the World album. Chicoy has been a teacher at Acadia Jazz University, Nova Scotia, Canada. He also led classes at the Rhythmic Conservatory, Copenhagen, Denmark. He has performed at the Gourmet Jazz Fest, Saint Martin, with Orlando Sanchez, Ernan Lopez Nussa, as well as being part of the Cuban delegation at the international festival in Qatar. From www.chicoy.com