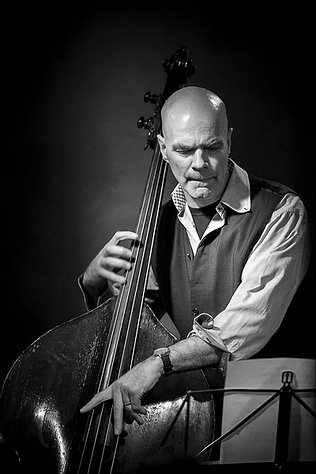 Joris Teepe (1962), a bassist from The Netherlands, is the first to make it to New York. He arrived in New York with only his bass and a bag, and quickly made friends with many musicians. He recorded his first CD a year later with Don Braden’s band, which featured Cyrus Chestnut and Carl Allen, as well as Tom Harrell. Joris was a highly sought-after bassist and everything took off from that point. He has worked with many of the “who’s-who” in Jazz, including Sonny Fortune, Rashied Al, Rashied Ali and Billy Hart. His music vision was shaped by his bebop roots. He became a member the Rashied Al Quintet for nine years. “When I first joined the group, Frank Lowe (later replaced with Lawrence Clark) was on saxophone. I didn’t know what they were doing. Joris is currently a leader and has released 10 albums. He is also a musician, record producer (many labels), educator (director Jazz Studies at Hanze University, Bass Professor Queens College, NY) as well as a bandleader. Joris Teepe was nominated in 2004 for the Bird Award at North Sea Jazz Festival under the category “Artist deserving greater recognition”. from http://joristeepe.com