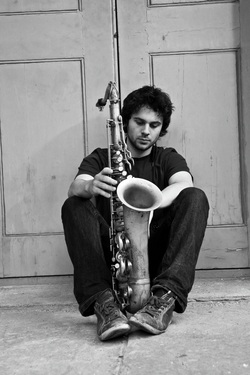 Josh was born to a musical family in 1989. He was fortunate enough to begin saxophone lessons at the hands of Pee Wee Ellis when Josh was 13. He was 18 when he was accepted onto the jazz course at The Royal Academy of Music. In 2011, he received a 1st-class degree. That year, he also won a Yamaha Parliamentary Jazz Scholarship as well as the Kenny Wheeler Jazz Prize. Edition Records signed him to a recording contract. Josh’s debut album, ‘Beginnings,’ was released in February 2012. It received widespread critical acclaim. He was also nominated for a London Jazz Award 2012 and has received awards from MBF Young Talent and EMI Music Sound Foundation. Pee Wee began touring when he was 16, with the ‘Assembly’ and ‘Still Black Still Proud’ bands. Blue Note Milan and the Royal Festival Hall in London, Ronnie Scotts, festivals including those in Slovakia, Finland and Denmark, France, Ireland and Spain, as well as festivals in Derby and Hull, Cheltenham and Edinburgh. Josh leads his own quartet with Ivo Neame (piano), Calum Gourlay(bass) and James Maddren [drums],] and is also a regular member in bands like Stan Sulzmann’s big band, Jeff Williams’ UK Quartet, Dave Hamblett’s Sextet (debut CD out Jan 2013 on Whirlwind Records), and plays in a group that includes Nikki Iles and Jeff WIlliams. He also toured in 2011 with Kit Downes’ group to promote Kit’s album, ‘Quiet Tiger.’ Josh has had the pleasure of working with many well-known musicians/bands such as Jason Rebello and Fred Wesley, Michael Mondesir and Tony Allen. bio by www.josharcoleo.com