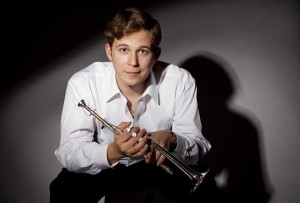 Josh Rzepka, a rising trumpeter and composer aged 27, has been called “a musician who doesn’t believe in limitations” by The Tribune Chronicle and “gifted” by the Cleveland Plain Dealer. His jazz playing and compositions have been praised, as well as his classical trumpet playing. His second jazz album, Into the Night is his follow-up to Josh Rzepka: Baroque Music for Trumpet (2010), and his critically acclaimed jazz CD Midwest Coast (2009). Josh quickly established himself as one of the most versatile young performers in jazz and classical music. He has performed at renowned venues such as Severance Hall in Boston, Boston’s Symphony Hall and Cleveland’s NightTown. Josh has performed solo recitals and concerts that range from traditional to contemporary to original jazz. The Akron Area Arts Alliance awarded Josh their 2011 Arts Alive! Rising Young Star award. Josh was honored to be awarded this biennial award and was delighted to be recognized by his hometown of Akron. Josh will tell you if you ask him what kind of music he likes to perform, jazz or classical. I enjoy listening to good music. Josh decided that he wanted to make a big step in his career by releasing a solo jazz and classical CD. Only a few things were certain: the jazz CD would contain all original music, the classical CD with a chamber orchestra and they would be recorded in NE Ohio. Josh stated, “I am very lucky to be able call NE Ohio home. The musicians here are truly top-notch.” I wouldn’t consider recording elsewhere. I have the ability to use local talent and make top-quality recordings. His debut jazz CD Midwest Coast was his first recording. It featured all original music and was praised by Cleveland SCENE as “a winning, listenable recording debut” with “impressive chops and taste”. It was recorded at the renowned SUMA Studios in Painesville in Ohio in the summer 2009. Midwest Coast is a collection of Cleveland’s best jazz musicians, including Jackie Warren, Peter Dominguez and Ron Godale. All three are long-standing veterans of the north-east Ohio jazz scene. Midwest Coast received significant radio airplay since its release. It reached the #33 spot in JazzWeek’s JazzWeek charts, #15 in CMJ Jazz and #2 in Roots Music Report Jazz. This is a result of the airplay on more than 100 radio stations across the country. While completing his MM at Boston University in the winter and spring 2010, Josh recorded his first CD of baroque concerti with a chamber orchestra called Josh Rzepka: Baroque Music for Trumpet. This recording includes music by Georg Phillip Telemann and Handel as well as music by Henry Purcell, Giuseppe Torelli and Johan Baptist Neruda. Cleveland-based recording and production company 5/4 Productions, a multi Grammy (r), award winning production and recording company, recorded the CD in Oberlin and Cleveland. Rzepka is featured as soloist, performing solo pieces and concertos accompanied by 12 strings and a Harpsichord. Josh graduated from the Oberlin Conservatory for Music with a double major, jazz trumpet performance and classical music. Josh recorded his second jazz album, all original compositions, in the studio during the summer 2011. Into the Night was the result. It features Jackie Warren, Peter Dominguez, and Ron Godale as drummers. The album also features Andy Hunter, a fellow Oberlin Alum, and Steve Kortyka, a local saxophonist. Into the Night was recorded at the brand-new recording studio in Oberlin’s Bertram and Judith Kohl Building – the new home of jazz in Oberlin. The multi-Grammy (r) winning recording and production company, 5/4 productions, recorded it. Into the Night received widespread critical acclaim. Critics said: “Into the Night and Josh Rzepka were everything that is right about jazz… 5 stars” JazMuzic.com “A solid musician who knows how to lead, this is a smoking player that never stray from being in the pocket. It’s a solid winner all the way.” Midwest Record. Jazz Radio Host Eddie Becton, KXLU 88.9FM, proclaimed Into the Night as “One of the Top 10 Jazz Albums of 2011”. The album has been airplayed in every major market across the country, reaching the #9 position on the JazzWeek charts and the #5 spot on CMJ Jazz. from http://www.joshrzepka.com