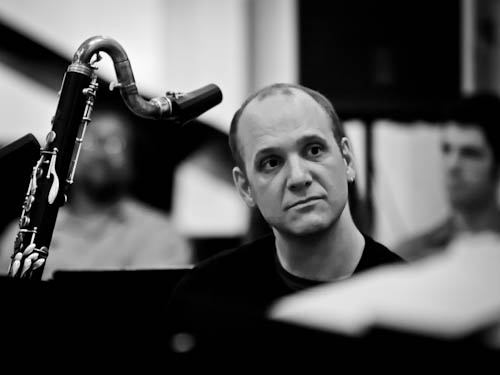 Josh Sinton was born in western Massachusetts and raised in Pine Barrens, New Jersey. He began playing music in third grade. He started on clarinet, trombone, and piano. In high school, he convinced his parents to buy him an alto-saxophone. He was only twenty-five when he realized his mistake and bought a bass clarinet and a baritone Saxophone. After studying composition and ethnomusicology at Chicago University, he took a break to study with Ken Vandermark and Ari Brown. After many years working, he was able to return to school at the New England Conservatory in 1999. He studied with Steve Lacy and Ran Blake, Jerry Bergonzi, Dominique Eade, and other teachers. He is grateful for the support he received from his teachers, but he also appreciates being able to get out of school. Josh is currently involved in and writes for many groups. Among them: holus-Bolus and Ideal Bread, as well as B.utterflies o.f. M.eat. Darcy Argue’s Secret Society, Heather and the Barbarians and Burnt Sugar are some of his other musical credits. He is also a member of the electro-acoustic duo Blivton. Josh currently lives in Brooklyn with Laura. They dream of one day having enough space to house a cat. All About Jazz