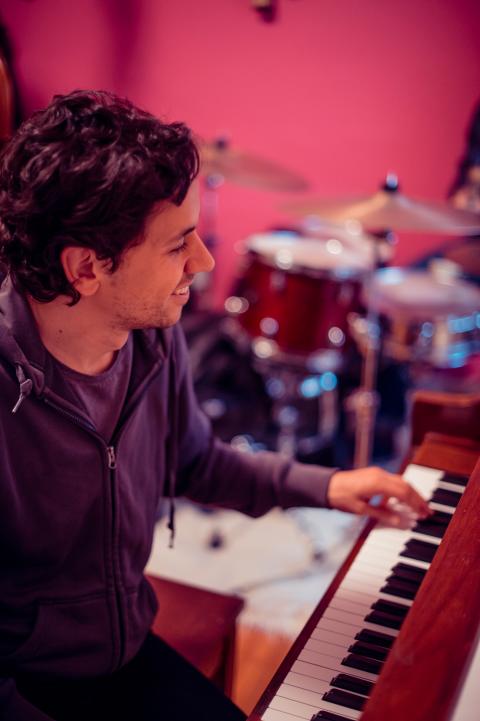 Juan Andres Ospina, pianist, composer and arranger, is currently a prominent member of an outstanding group of Colombian musicians. His debut album, BBB: Barcelona Bogota Boston (Armored Records 2009), was recorded in Boston by a select group of jazz musicians. All About Jazz magazine rated it one of the best jazz albums of 2009. Juan Ospina has been involved in the production, arrangement, and recording of the piano on several international award-winning albums over the years. One of these albums is Marta Gomez, Colombian singer, Este instante (2015). It won a Latin Grammy, received two Latin Grammy nominations, and Sofia Ribeiro, Portuguese singer, Sofia Ribeiro’s Ar (2012). This album won the “Revelation Prize” by Jazzman. The debut CD, Cd The Cherry on my Cake (2011), won a Gold and Platinum Disk award, and reached the top in many European countries. He also wrote arrangements for Colombian singer Fonseca’s Latin Grammy DVD Fonseca Sinfonico in 2014. This album won a Latin Grammy for best pop vocal album. In 2007, he was the Latin Grammys Live Achievement Awards ceremony’s arranger. Juan Ospina is the musical director of Portuguese singer Sofia Ribeiro. He has also toured extensively with Sylvie Bourban (Switzerland), Marta Gomez, Fonseca (Colombia), Banda Magda (New York). He has appeared in some of the most prestigious theatres in the United States, including the Lincoln Center (New York), and Carnegie Hall (New York), and at important jazz festivals throughout Europe, Latin America, and Japan. The 14-time Grammy Awardee Paquito D’Rivera Quintet performed some of his original compositions at important venues like New York’s Blue Note or the Carnegie Hall. His Big Band compositions were also performed by the UMO Jazz Orchestra, Yukimori Big Band(Japan), Greg Hopkins Big Band and Bogota Big Band in Colombia. His music album BBB was requested by the prestigious Berklee College of Music in Boston, the NEC (New England Conservatory), and the UNT (University of North Texas) as well as the Universidad Javeriana in Bogota, Colombia. He is also a producer, arranger, and pianist. His brother Nicolas Ospina leads the comedy/musical group “Intentalo Carito”. They co-wrote the song “Que difficile es hablar espanol”, and have more than 13,000,000 views on their Youtube Channel. Their fan base is growing every day, reaching millions of people in different countries. They have performed together in Australia, Spain and the US, and they have attracted the attention of many important people around the world. Juan Andres began his musical studies at the Universidad Javeriana in Bogota. He then moved to Barcelona (Spain) where he continued his jazz and classical studies at the Taller de Musics and the Escola D’Angel Soler. He is awarded a scholarship to the Berklee College for Music in 2005 and graduates Summa Cum Laude. He studied with musicians like Maria Schneider, Danilo Perez and Greg Hopkins at Berklee. He was also a recipient the Jazz Herb Pomeroy award and the Herb Pomeroy award. From www.newmusicusa.org, he moved to New York City in 2009.