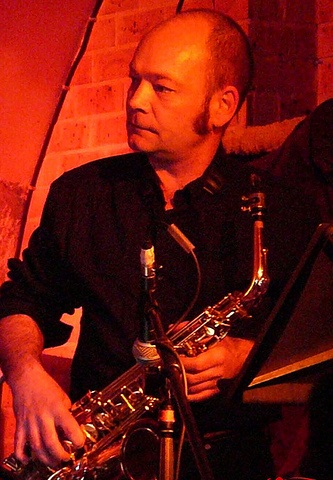 Julian Julien is the founder and frontman of Fractale, an instrumental jazzy-Zeuhl collective. Julian Julien began his compositions in the early 1990s. One album was published under this name, entitled Live Suranne (2008). First, he released La tombe des lucioles (1993), and then he continued to compose the soundtrack for “Memoire d’un maître chien”, a french documentary. In 1998, he self-published his first album Tupperware et Bibelot. He then released “Terre” and “Strange” (2006). The musical signature of these two official efforts oscillate between avant-garde-minimalism (mantric-like meditation) and psyched-out jazz. The musical direction is similar to the world-inflected jazz of Codona, Codona and Brother Ah the classic minimal epics by Jon Hassel and Ingram Marshall (with the addition of punchy cosmic grooves with a discreet reminiscence of Magma, Dun, and a few other Zheul greats).