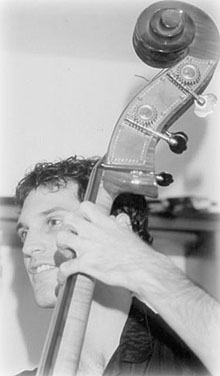 Over time, Justin Hellman’s sound has changed. It writhes, thanks to the fresh blood of Justin Hellman on bass, Eric Vogler on guitar, who have been performing and creating music together for many years. Their approach is fresh and exciting, but still rooted in jazz tradition. The group draws inspiration from John Scofield, Pat Metheny and Wayne Shorter and strives to create a dynamic sound with a lot of tension and release, but also has a touch of lyricism. Justin Hellman was born March 25, 1980 in Chicago, IL. He grew up in Northbrook, IL. His friends convinced him at 16 to learn the electric bass and form a band. Vision Route performed for 2000 people at the high school’s Loyalty Day assembly in just three months. They sang rock covers and some of their original songs, which were Justin’s first tunes. Justin moved to California in 1998 to study at UC Berkeley. He had only been playing bass for two years and decided to major in music to learn how to play the acoustic. He studied with Stephen Tramontozzi (assistant principal double bass player at the San Francisco Symphony), and also concentrated on composition, orchestration and counterpoint. He wrote many pieces of classical music while in school, including a symphony he created as an honors project in his senior year. He was also taking electric bass lessons from Kai Eckhardt, Michael Manring, and performing with Wayside. This band he started with some of his fellow students. Wayside performed on stage alongside bands such as The Motet and Melvin Seals, and Justin was able to jam with Paul Hansen (Bay Area) and Paul McCandless (Tea Leaf Green) at some of their shows. In 2002, they played their last show at the High Sierra Music Festival. Will Bernard, guitarist, joined them for a few songs. Justin graduated from Berkeley and began to teach private lessons. He then focused on his jazz career. He started getting calls from musicians looking for a bass player as word spread about his ability to play. Justin was able to perform with Julian Lage and Henry Kaiser through his freelance work. He also played regular jazz gigs alongside Tangria, Echo Beach, and his own trio. Additionally, he started to develop his “improrhythmic polyvisational” style with his fusion band Monkey Knife Fight. He composed the majority of his songs for this group, which he recorded on his debut album Shakin’ it Like a Blue Funk Monkey. Justin assumed the weekly Rasselas jam session in San Francisco in 2005, where he was able to perform with Taylor Eigsti. He also performed with Terrie Odabi during his two-year residency at Rasselas, which inspired him to create the R