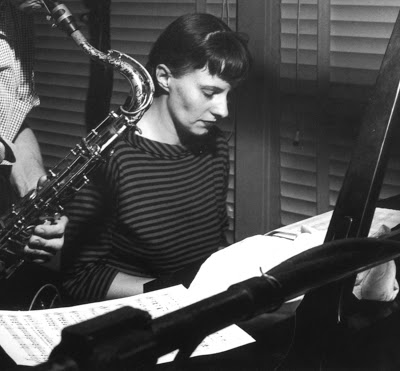 Jutta Hipp (February 4, 1925 in Leipzig, Germany – April 7, 2003 in Queens) was a jazz pianist who also had some success as a painter. She mostly worked in bebop and cool jazz. She first studied painting in Germany, but later played jazz during the war and she indicated jazz was important to her during that period. After the war she moved West due to the communist occupation of East Germany, and in West Germany she worked with Hans Koller for a time. In Germany she also led a quintet, Albert Mangelsdorff’s brother Emil was one of the noteworthy members. In 1954 she played with Attila Zoller. Critic Leonard Feather was impressed with her work when he heard her in Germany and soon after she moved to New York City where she would spend most of her life. She initially drew some criticism from critics who felt she was too similar to her sponsor Horace Silver. In 1956 she played at the Newport Jazz Festival and did a studio album with Zoot Sims, which is considered possibly her best. The album is also considered rare, but a remastered edition from the Japanese division of Blue Note Records came out in 2003. She also worked for New York based trios. She had been determined to be seen as an equal to male players, but at the same time she felt intense nervousness playing with other musicians she admired. The anxiety the profession caused her led to her abandoning jazz in 1958 and from then on she made her living primarily as a seamstress. She also returned to her first interest of painting, and her portraits of various jazz musicians became popular with musicians. Although she maintained some contact with musicians, she had cut herself off from the music industry to the point that by 2000 Blue Note did not know where to send her royalties checks. Lee Konitz was one of a few musicians who kept in touch with her until her death in Queens. She never married and had no children. After her death she became of some interest as a woman instrumentalist in the New York jazz scene. from wikipedia