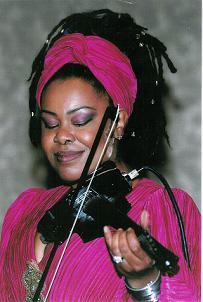 American violinist Karen Briggs was born 1963. She was born in New York City, and grew up near Portsmouth, Virginia. Briggs began lessons in violin at an early age and attended Norfolk State University. She graduated from Woodrow Wilson High School, 1981. She studied music education and mass media at Norfolk State University. She was already playing with the Virginia Symphony Orchestra in 1983. She stayed there for four more years. She returned to New York City in 1987 and won four amateur nights at the Apollo Theater. Briggs married in 1988, and moved to Los Angeles. She then embarked upon her first professional tour with Soul II Soul. The tour took her all over the United States and Japan. Briggs auditioned in 1991 for Yanni, a contemporary keyboard composer. Briggs spent the next 13 years recording and touring with him. She can be seen in his live music videos including Yanni Live At the Acropolis. Yanni’s last appearance was on the 2004 Ethnicity tour. Briggs is known for her improvisational style. She can be found at home in many styles, from jazz and gospel to light orchestrations and rhythm and blues. Her explorations into different genres of music were varied and sometimes personal. Over the years she has performed with many artists, including En Vogue, Chaka Kan, Chaka Khan and Patrice Rushen. She also appeared on Hidden Beach’s UnwrappedCD Series, Tizer, and Soul II Soul (1990 World Tour). She released Soulchestral Groove in 2009 featuring her improvised soloing to original compositions by Briggs as well as cover arrangements by others. Wikipedia