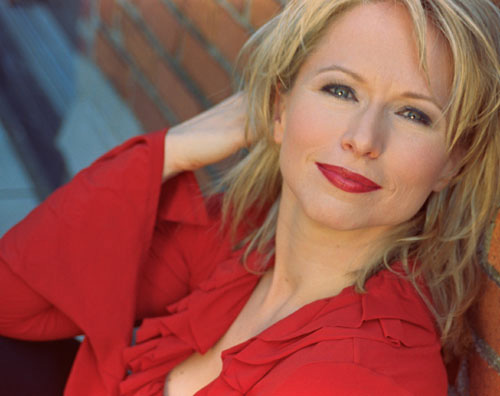 Karen Oberlin said that telling the story musically and lyrically is what makes me most excited and motivated as a performer. Oberlin was hailed by the New York Times as one of the top interpreters of the Great American Songbook. In 2013, Oberlin received the Mabel Mercer Foundation’s most prestigious Donald F. Smith Award, and an Honorary Doctorate of Music from Dix Hills Performing Arts Center/Five Towns College. Karen Oberlin was previously a winner in Nightlife, Bistro and MAC Awards. She recently returned from her second triumphant week-long engagement at London’s finest cabaret club, Crazy Coqs at Brasserie Zedel. The New York Times gave her her fourth and third rave reviews for her week at Feinstein’s at the Regency, and her three-week engagement in the Oak Room at Algonquin Hotel. Stephen Holden wrote, “Beyond having a beautiful voice, poise, and interpretive insight. Ms. Oberlin has impeccable classical pop style (and) music intelligence.” David Yaffe, music critic at The Nation, said that Ms. Oberlin “reaches in to the minds and muses, to teach us and dazzle us, and take us to Tin Pan Alley nirvana as deep as the ocean and as high as the sky. She is truly a wonder.” Oberlin has performed at many major New York venues, including Jazz at Lincoln Center and The Town Hall, Iridium Jazz club, Merkin Hall, The Metropolitan Room and Jazz at Lincoln Center. She has also performed nationally at Guild Hall in Hamptons, The Ordway Theatre, Philadelphia, The Prince Theatre, The Colony Palm Beach and The Prince Theatre. Three of her critically acclaimed recordings are on Miranda Music, including “Secret Love” and a live recording at Algonquin’s Oak Room. In February 2014, she will release a duo CD featuring Sean Harkness, a virtuosic guitar player. You can hear her on many compilations, including “Secret Love: The Music of Doris Day” by Herb Martin and Duke Ellington, as well as “Renaissance Man”, in the all-star CD “Secret Ellington”(True Life), featuring Joe Lovano, Grover Washington, Jr., Freddy Cole, and others. Ms. Oberlin has appeared in over 100 Off-Broadway productions of “Our Sinatra,” as well as her own shows, including recent performances in Paris and London. She was part of the inaugural Cabaret Conventions held in Philadelphia and Hamptons. She has also performed at the New York shows at Jazz at Lincoln Center as well as Town Hall. There, she was also featured in the Broadway By The Year series at Town Hall. She was Maureen’s lead role in “Rent” the Broadway classic. Ms. Oberlin also played leading roles at prestigious theatres like the Palace Theatre in Louisville and the North Carolina Theatre. She can be seen in independent and feature films as an actress, and has appeared in everything from Shakespeare to national commercials. She was also a member of “Where’s the Band”, a professional acappella group. For many years. Ms. Oberlin is a skilled performer in jazz, classical music, cabaret and musical theatre. She is the granddaughter of Vaudevillians, and was the youngest of two classical musicians’ daughters. As a child in Central New York, she performed regularly in musical theater and other performances. She was a musician as a child, playing flute and piano, and cello in the local orchestra. At six years old, she performed her first opera role. As a teenager, she led several new-wave and rock bands in her hometown. After receiving her B.A., she has been performing continuously since then and has trained extensively. She graduated from the Circle In The Square Professional Workshop Broadway theatre conservatory after receiving her B.A. in English Literature. New York City was the catalyst for Ms. Oberlin’s discovery of jazz and her deep appreciation for the Great American Songbook. As a vocalist for over twenty years, she has taught master classes in singing, acting and interpretation. She is also a mentor and director of many aspiring song-interpreters. Ms. Oberlin is a committed yogi, a happy mother, stepmother, and married to David Hajdu. from http://www.karenoberlin.com