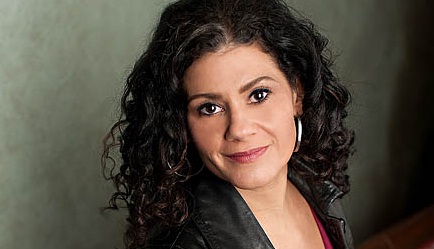 Karla Harris’ jazz voice is renowned for its richness and versatility. She sings with a smooth, vulnerable voice and a powerful delivery. Her influences include jazz, jazz standards, blues, soul and Latin jazz. She blends them into a musical tapestry that is rich in texture while respecting the roots of each song. Her talent lies in her expansive vocals, but also in the ability to tap into the emotion and deliver it fully. Karla’s passion for singing began with a love of words and the power that they can express, whether written or sung. When she was a little girl, she spent Saturday mornings writing stories and Saturday afternoons transcribing the lyrics to some of her favorite songs from her parents’ collection. She performed those songs for her family at shows that she and her cousin put on. But her first experience performing in front of a real audience was at age 10. Through high school, she continued to participate in talent shows, singing groups, performing troupes and garage bands, as well as piano lessons. Karla, who was completing her bachelor’s in speech communication, was asked to sing with the St. Louis Jazz Quartet. This Young Audiences group introduced jazz to schools in St. Louis while she was in college. Karla was a mentor to Jeanne Trevor, a well-known Midwest jazz singer. Karla joined the jazz quartet and soon became the lead singer of a popular dance group. This dual experience allowed her to combine skills from both music genres. Karla quickly became a popular and highly-respected singer who performed regularly with top St. Louis groups. Karla was drawn to jazz music in the early 2000s by its rich composition and creativity. It was during this time that she was able to sing in a quartet with Tom Kennedy, an internationally acclaimed bassist whose credits include Rosemary Clooney and Freddie Hubbard, Mike Stern and Lee Ritenour, Dave Weckl, Ben Vereen, Dave Weckl, Dave Weckl, Ben Vereen, Dave Weckl and many others. It was a valuable experience that helped her get to Portland, Oregon’s jazz scene. Karla started working with Randy Porter (Diane Schuur (Gino Vanelli), Madelaine Eastman), Bobby Torres, Etta James), Steve Christofferson, Nancy King), Todd Strait, Todd Mahogany (Eldar, Karrin Allyson), Mike Horsfall, Todd Strait (Kevin Mahogany), Mark Simon (Leroy Vinegar), Mike Simon (Leroy Vinegar), Chuck Redd, Pink Martini and Rebecca Kilgore), furthering her repertoire and developing her abilities and a nurturing environment. Karla was a regular performer at Portland’s premier jazz clubs. She has performed at many events, including the Newport Jazz Festival and Cathedral Park Jazz Festival. WSIE Radio describes Karla as a “powerful singer at ease in all settings, a singer who makes every song memorable, and a singer for every season.” Clubscene says, “She engages me and makes us happy to spend the evening with her.” Her versatility makes her stand out. Karla’s first CD, “Twice As Nice”, was released in 2007 by Tom Kennedy. The recording features Kennedy’s arrangements. It includes two songs from Cy Coleman, Johnny Mandel and Richard Rodgers. Jazz Scene Magazine wrote that Harris is “always respectful of her American Songbook options, Harris has superb intonation, and a contemporary and appealing approach to the songs.” She also performs with many of Atlanta’s top-call jazz musicians in combos and big bands. She met Ted Howe, a pianist, composer and arranger from Los Angeles. He was the producer of Karla Harris’ latest recording, “Karla Harris sings the Dave and Iola Brubeck Songbook”. This is the first studio recording that exclusively features vocal renditions of 11 Dave Brubeck compositions, with lyrics by Iola Brubeck, his wife of 70-years. It features Karla, Ted Howe and Tom Kennedy as well as drummer Dave Weckl, saxophonist Bob Sheppard. Summit Records will release the album in February 2015. A debut live performance is planned for the Sarasota Jazz Festival. from http://karlaharris.com