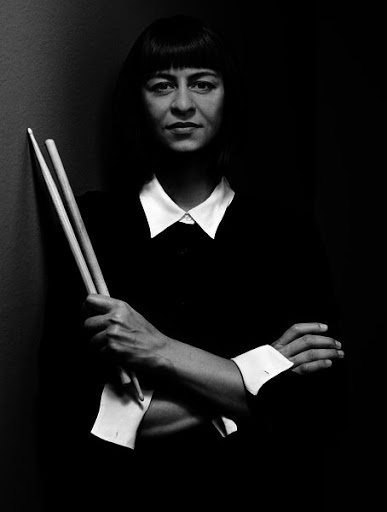 Reputable institutions like Konzerthaus Vienna or Deutsches Theater Berlin, as well as off-spaces like parking lots in France and hidden venues such as an old factory that is pulsing to Katharina’s beats along the Danube, are just a few examples of Katharina’s artistic practice. It includes improvised music, with partners such as Ken Vandermark, Terrie Hessels, Kazuhisa Uchihashi, and Terrie Hessels, and multidisciplinary street theatre with La Compagnie Luc Amoros. Live shows with her techno band VENTIL and with Chicks On Speed, to contemporary dance and performance, and with artists and collectives such as Oleg Soulimenko and Toxic Dreams. Katharina maintains an artistic perspective that is both multidisciplinary and multidisciplinary, despite all these varied practices. This perspective on art and her participation in many collaborations with interesting partners have enabled her to travel the globe – from The Netherlands, Mexico, France, China, Ireland, Australia. Katharina was born in Vienna, Austria in 1987. She is a graduate of Fine Arts/Painting. Katharina began playing the drums when she was nine years old. Her main interests in drumming include polyrhythmical, polymetrical, odd, and chaotic structures, as well as understanding how to approach complexity. She is also a curator of experimental art and music events in Vienna. Zusammenziehen (a:z) was her first choreographic work. This series of performances on the political dimension drums, movement, and space, which she began in 2012, was shown at Tanzquartier Wien and Arsenale, Venice, Theatre de la Ville, Paris and won many international art awards and prizes. Katharina has already performed and / or exhibited in: Austria, Australia, Belgium, Canada, Canary Islands, China, Columbia, Croatia, The Czech Republic, France, Germany, Great Britain, Ireland, Italy, Japan, Lithuania, Luxembourg, Mexico, The Netherlands, Norway, Poland, Romania, Slovakia, Slovenia, South Korea, Spain, Switzerland, Turkey from www.katharinaernst.com