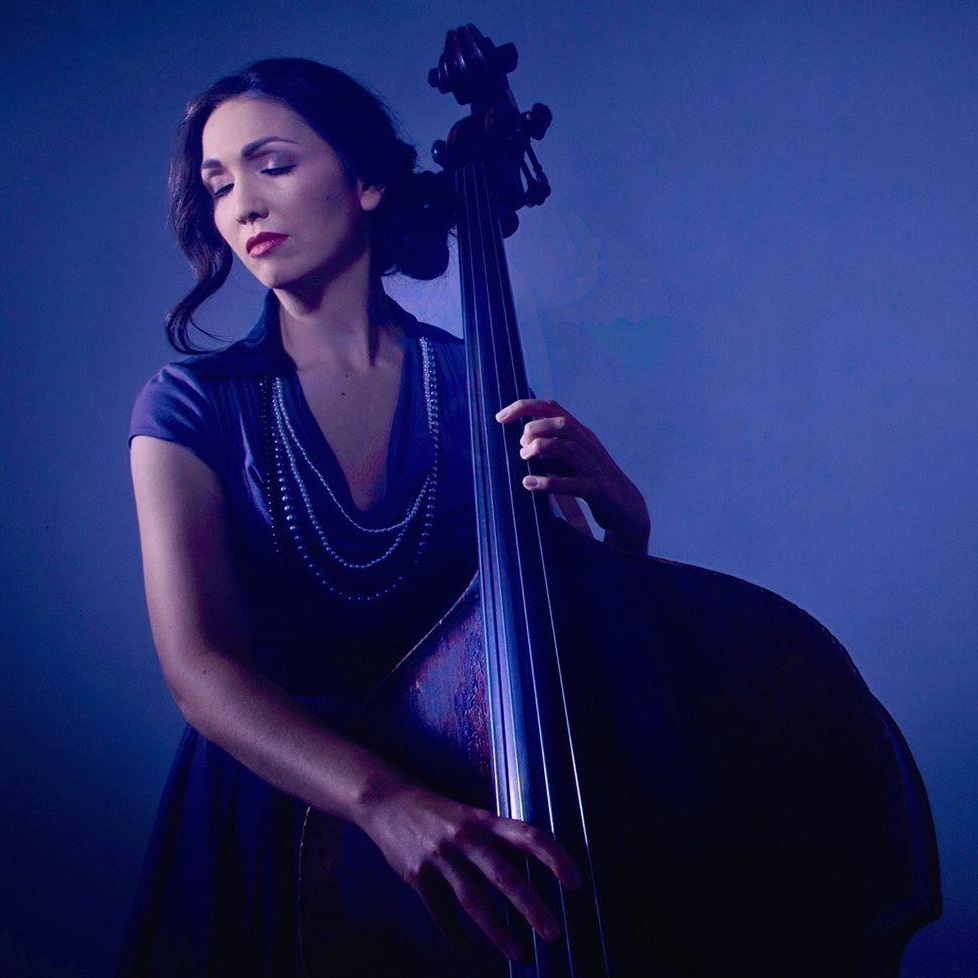 Katie Thiroux, a vocalist and bassist with exceptional talent, is an example of her determination. She grew up in Los Angeles and was raised with music. Her first lessons were on the violin at age 4, then she switched to the acoustic basses at age 8. Katie continued her studies on the bass and explored classical and jazz vocal styles. She was able to land principal roles at the LA Opera, Opera Pacifica and Opera West by age 10. Katie was captivated by an early recording of Lionel Hampton and decided to pursue her passion for jazz. She began private lessons with Tierney Sutton, a jazz vocalist. Katie was a highly-regarded Hamilton High School Academy of Music student and received many accolades for her dedication to jazz. She was 17 when she was recognized for her exceptional skills and was awarded the coveted Los Angeles Jazz Society “Shelly Manne New Talent Award.” In 2006, she was also honored by the National Foundation for the Advancement of the Arts and won DownBeat awards for voice and bass. Katie was offered mentorships at both the Brubeck Institute (where she met John Clayton), and the Vail Jazz Workshop (where she continues to mentor). She was an active bassist while still in high school and worked with jazz legends such as Jack Nimitz (left), Charles Owens (right), and Barbara Morisson (right). Katie received the Phil Ramone Presidential Scholarship to Berklee College of Music, Boston in her last year of high school. The Presidential Scholarship, which is an award of distinction given to six new students each year, was selected from an international field. The scholarship covers tuition and all costs for an undergraduate degree at Berklee. Katie was a natural leader and joined Branford Marsalis before the Fall Semester began. This was only the beginning of Katie’s impact at Berklee. She was also invited to perform with Dr. Billy Taylor and Terri Lyne Carrington. Branford Marsalis was also invited. In addition, she worked regularly in jazz venues in New York City (The Kitano), and Boston (The Regatta Bar). She was invited to join the faculty of one of Berklee’s International Schools, Universidad de San Francisco, Quito, Ecuador, in her final semester of college. Katie turned down her plans to go back to Los Angeles and accepted the invitation to become a professor at USFQ, Ecuador in 2009. She taught harmony classes and led jazz ensembles. As head of the Vocal and Bass departments, she managed a studio with 30 voice and bass students. After her time in Ecuador, Katie returned home to Southern California to complete her Master’s degree at the Bob Cole Conservatory of Music CSU Long Beach. She was awarded a full tuition scholarship. Katie received her Master’s of Music, Jazz Studies, in 2012. She has been active on both the east and west coasts, performing at the Newport Beach Jazz Party and Festival as well as with John Clayton. Katie also performed with John Clayton in a special duo performance at the Newport Beach Jazz Party. In 2013, Katie was awarded a Kennedy Center Betty Carter Jazz Ahead Fellowship. Katie founded The Katie Thiroux Quartet in 2013 with guitarist Graham Dechter of the Clayton-Hamilton Jazz Orchestra (Elias, Michael Buble), Katie’s saxophonist Roger Neumann, Anita O’Day, Woody Herman, and Matt Witek, drummer (Larry Fuller u0026 John Pizzarelli Quartet). Her group has been working together as much as their schedules permit. The most recent album will be released in February 2015. Grammy Award-winning drummer Jeff Hamilton produced the recording. Grammy Award winner Steve Genewick engineered it and Ron McMaster, Grammy Award winner, mastered it at Capitol Records. Jeff Hamilton says, “There is no room for weaklings within this business. Katie’s determination and hard work are something I admire.” She’s doing all she needs to.” Thiroux has performed as both a leader or a sideman at many jazz festivals across the United States, Canada, Mexico, Germany and Finland. Her passionate belief is that jazz culture, history and styles are essential to keeping the music alive. Katie is also a member of her quartet and has performed with Bill Cunliffe (piano), Geri Allen, Helen Sung and Tamir Hendelman, Eric Reed (trumpeter), Terrell Stafford (saxophonist), Jeff Clayton (saxophonist), Charles McPhearson (saxophonist), Terrell Stafford (trumpeter), guitarists Terrell Stafford and Larry Koonse as well as drummers Lewis Nash, Jeff Hamilton and Tierney Sutton and Tierney Sutton and Tierney Sutton and Niki Harris and Tierney Sutton, respectively. Katie’s ability to play a swinging bass and sing with clear vocals, and her inspired instrumental arrangements, are reminiscent of her musical idols Ray Brown, Chet Baker, Chet Peterson and Tierney Sutton. Katie Thiroux is a rising star in today’s music scene because of her knowledge, perseverance, and passion for the music. From www.katiethiroux.com