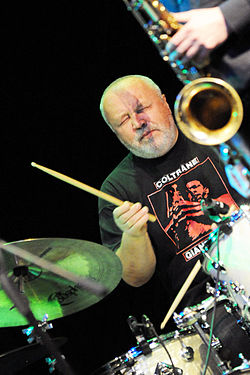 Kazimierz Jonkisz was a Polish citizen who was born in 1948 in Wilamowice. Kazimierz Jonkisz began his musical education at age 10 by learning accordion at a local high-school. He switched to drums at the Bielsko Biala music high school later. At the age of 18 he made his debut in jazz, winning the Jazz by Odra ’67 Festival as a soloist. Jonkisz received the Krzysztof Kmeda award at the Academy of Music in Katowice in 1971. He was considered to be one the most talented european drummers and was faithful to Elvin Jones. He recorded and worked with top Polish jazz musicians such as Zbigniew Namyslowski, Adam Makowicz, JP. Wroblewski and Michal Urbaniak; also recorded with international jazz stars such as Al.Cohn and Roy Hargrove, Larry Coryells, Amina Cllaudine Myerss, Monty Waters. He has been leading his own bands since 1978 where many of the best polish jazz musicians have made their professional debuts. Over 70 records were recorded by him, including some as a leader. The first record, “Tiri Taka”, was released in 1980. He performed at many festivals across Europe and Poland, including Jazz Jamboree and Molde Jazz Festival. He has been teaching drums at Warsaw’s jazz department since 1995. He regularly teaches drums in the summer jazz workshop in Pulawy in Poland, along with Musik Hoch Schule and Berklee College of Music teachers. from http://www.jonkisz.pl