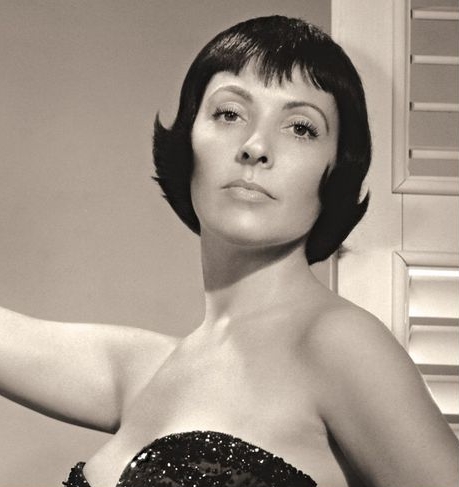 Keely Smith (Dorothy Jacqueline Keely), jazz singer, was born 9 March 1928 and died 16 December 2017. American singer, who was married to Louis Prima and part of the most popular Las Vegas lounge act in the 1950s. Standing sideways, her impassive basilisk star part of the act, Keely Smith, a singer and songwriter, was the perfect foil for her husband, trumpeter-vocalist Louis Prima. Smith, where Prima was ecstatic, soaring around the stage, singing with gusto, and playing the hot jazz trumpet, was cool. Her vocals were like a balm in the chaos. Prima and Smith were the most popular Las Vegas lounge acts of the 1950s. They played season after season at Sahara Hotel with the Witnesses. They were loved by tourists as well as the Rat Pack crowd, and other celebrities. It seems that there was not a single night without Frank Sinatra and Sammy Davis Jr joining the party. She was born Dorothy Keely in Norfolk (Virginia) and is of mixed Cherokee-Irish descent. When she was nine years old, her parents divorced. Her mother later remarried Jesse Smith. Keely took his stage name. Before singing on a children’s radio station, she was part of Saxie Dowell’s band at the local naval aircraft station. She was 15 when she started her first job as a paid singer with the Earl Bennett Band. On a 1947 family vacation in Atlantic City, she had seen Prima perform. She heard that he was performing in Virginia Beach the following year and that he was looking to hire a singer. So she auditioned. Prima hired her immediately and she became his fourth wife in 1953. Prima, a New Orleans native, had moved to New York’s 52nd Street in 1934. His bandstand energy made him a celebrity. Prima had to find a partner to balance his wild stage presence and reinvent himself as a comedian. Smith was the show’s calm counterpoint. He sang solo or in a duet with Prima, highlighting her cool-jazz credentials. The musician and writer Leonard Feather described her as a “popular jazz-influenced comedienne-vocalist”. Smith and Prima played five shows per night, beginning at midnight and ending at 6am. With Sam Butera, an ebullient tenor-saxophonist, Smith and Prima were the perfect combination; one controlled, the second agitated, and raucous. Their star role in Hey Boy!, 1959’s film, helped them to become well-known throughout the US. Hey Girl! Their version of That Old Black Magic received an inaugural Grammy in 1958, along with a number of other successful Capitol albums. It worked despite the “bizarre, but funny” nature their relationship. Smith was tired of Prima’s constant philandering, and filed for divorce in 1961. Smith was able to focus on her daughters Toni and Luanne, and not only did she continue to perform with Butera for a while. Prima insisted that Smith be given a solo contract with Capitol. This was a win for her. I Wish You Love, her album featuring Nelson Riddle’s orchestrations sold more than a million copies. The single was also nominated for a Grammy. Her songs were also featured in the soundtracks to films starring Robert De Niro or Martin Scorsese – including Raging Bull and Casino, both of whom were long-time admirers. Advertisement Smith resumed her career and played sold-out shows across the US. Her recordings included a 1963 session with Count Basie’s orchestra. The Intimate Keely Smith, reissued last-year, teamed Smith with a small jazz band. Keely Smith Sings The John Lennon u0026 Paul McCartney Songbook, a collection devoted to Beatles’ love song arrangements, featured arrangements by Benny Carter. The later I’m In Love Again (1985) was recorded with Bud Shank, Bill Perkins, and Smith. Gap’s use in 1998 of the Prima Smith classic Jump, Jive and’ Wail in a TV ad campaign sparked a renewed interest in big band and swing music. Smith was delighted and was nominated again for a Grammy in 2001 for her album Keely sings Sinatra. After appearing at the House of Blues in Los Angeles in 2005, she went on to perform at Feinstein’s at The Regency in New York. She also won a month at Cafe Carlyle, New York in 2005. In 2007, she signed a five-album contract with Concord Records. She also performed at the 50th Anniversary Grammy Awards concert where she sang That Old Black Magic. She was also a frequent presence on nostalgia-based package show, including a rare UK guest of honour at Summertime Swing, East Grinstead, West Sussex in August 2010. She performed for President John F Kennedy’s Inauguration, was awarded the Cherokee medal of honor in 2000 and received a star on Hollywood Walk of Fame. Tony Bennett called Smith “one of the greatest jazz-pop vocalists of all times”. Toni and Luanne are her survivors. In 2006, Smith lost her third husband, Bobby Milano, who she had married in 1975. Her earlier marriage to Jimmy Bowen, a record producer, ended in divorce. From www.theguardian.com