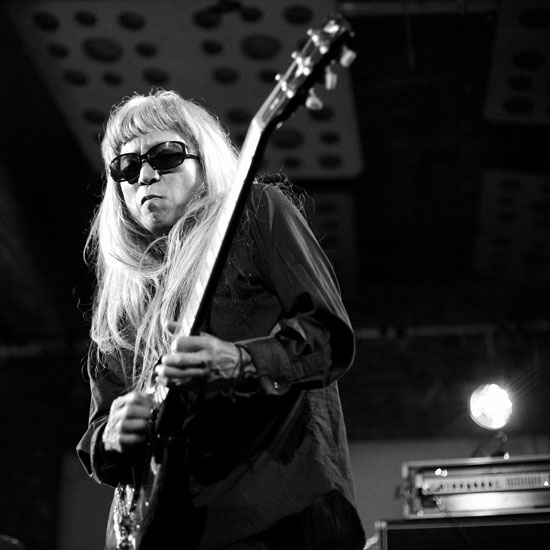 The verb “play” is insufficient to describe the actions of Keiji Haino with a guitar. Perhaps Mauling, or even destroying, might be a better choice. Whatever his role, Haino has led the Japanese noise-jazz/rock movement for almost three decades. He started with seminal noise-jazz/rockers Lost Aaraaff back in 1971. Even among Japan’s music lovers, he is still a mystery. I once asked a group Japanese students about Haino. They all said they were eclectic music fans and that he was not familiar with him. However, his music is beautiful, inspiring, and unpredictable. This makes it a great choice for those who are interested in music performance on the fringes. Haino, who is rock star-like with his long black hair and always-present sunglasses, is an accomplished musician who loves to experiment with metallic sounds. Haino’s solo recordings are often done live without any overdubbing. Haino also adds to the frenetic improvisational mood by emitting shrieks as he strangles his Gibson SG neck. For a more familiar example, think about the extreme moments of Sonny Sharrock or Pete Cosey’s soloing with Miles Davis in mid-70s. Fushitsusha’s playing, on the other hand, is more refined and reserved than Haino’s. It reminds me of Fred Frith or Bill Frisell. However, this doesn’t mean that Haino or Fushitsusha don’t love to have fun and get wild. They are well-known and revered for their ability to crank up the volume and kick out the jams. The aural chaos they create is often breathtaking. Keiji Haino, a guitarist who is not for everyone, is not for the faint-hearted or those who like to compare every guitarist to Edward Van Halen. Although his output isn’t essential (some solo recordings are repetitive), he is a formidable player when it comes pushing the boundaries and noise of music and the place the guitar plays in this discourse. Allmusic