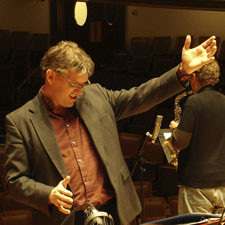 Ken Schaphorst started leading a big band in 1989 that was a great training ground for many young talent. Schaphorst, who plays keyboards and trumpet but is mainly a writer, moved to New England in the 1980s. He attended Swarthmore College and the New England Conservatory. He helped to found the Jazz Composers Alliance in 1985, which showcased the work of jazz composers. Schaphorst was appointed director of jazz studies at Lawrence University, Appleton, Wisconsin in 1991. He remained there for ten more years before returning to Boston in 2001. In that time, he became the chair of the New England Conservatory’s jazz studies and improvisation departments. John Medeski and Uri Caine were among the many members of Schaphorst’s big band. This group mainly features Schaphorst’s arrangements and compositions. Making Lunch (1989), After Blue (1991) and Purple (1999) are Schaphorst’s big band recordings. His ten-piece group also released When the Moon Jumps (1989), After Blue (1991) and Purple (1999). In 1997, Over the Rainbow was released, which included songs by Harold Arlen featuring Medeski, Martin, and his ensemble.