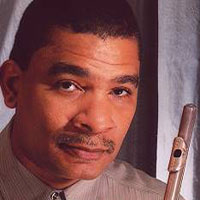 Kent Jordan was the son of Marlon Jordan (trumpeter) and Kidd Jordan (saxophonist). His early attempts at commercialism with his Columbia records almost cost him his place in jazz before he could mature. He was a graduate of the Eastman School of Music, and the New Orleans Center for the Creative Arts. Ellis Marsalis inspired him at the latter school (with whom he recorded). Before he recorded his Columbia albums (1984-1986), Jordan was a member of the Improvisational Arts Quartet and Jasmine. Jordan’s third Columbia album, 1988’s Essence, is stronger jazz-wise. Since then, Jordan has toured with Elvin and demonstrated to the jazz world that he can play original music. Allmusic