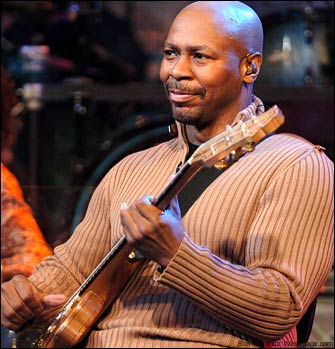 The Messenger is Kevin Eubanks’ second Mack Avenue Records album. He continues to pursue his unique musical vision. The vision allows the listener to share a musical journey with Eubanks that truly exemplifies his current stage in his long and distinguished career. One that has, over the past three decades, seen him embrace all aspects of his musical experiences while still seeking out new horizons. The Messenger is not only a record that showcases the guitar’s incredible virtuosity, but also his remarkable compositional skills. He wrote all but two of the tracks. The Messenger can be described as a “Kevin Ebanks” recording, without any specific categorization. His intention with The Messenger was to show the breadth and diversity of his artistic influences. Eubanks says, “I wanted to expand my musical horizons a bit more on this record.” Eubanks states, “I didn’t want to be so concerned about the ‘jazz sound’ as much; instead, I wanted to let out more of what I’ve been musically exposed too.” Eubanks also compares this philosophy with sports: “It’s like professional athletes can play three to four sports. You have to choose which one you prefer in society. But that doesn’t make you any less of who you are.” Eubanks says, and this is what he has done on the album. The guitarist’s infectious track, “The Title Track,” opens the program and gives the listener a glimpse into the unique listening experience that is ahead. This album is reflective– “Sister Veil,” “Queen Of Hearts,” “Loved Ones,” and “The Gloaming.” It’s also funky-–”JB,” a nod at James Brown; and “Led Boots,” a Jeff Beck tune. One of the more fun tracks is Eubanks’ arrangement for “Resolution”, with a vocal bass line by Alvin Chea from Take 6. Eubanks laughs, “With ‘Resolution’,’ I didn’t want to be blasphemous with people saying Oh, no. he didn’t’.” “But I think, you know that Trane might like it!” Eubanks adds. As for blues, “I like playing blues; I like sitting in and jamming with Buddy Guy at his Chicago blues club. Eubanks and his band have the chance to jam and stretch out on these tracks. Eubanks says that he wanted the groove to dominate, but also that those tunes would be enjoyable to play live and that people could sit in. The project has a family feel, with younger brother Duane playing trumpet (“Sister Veil,” JB,” “420”) and Robin playing trombone (“JB,” “Queen Of Hearts”). Eubanks believes that, aside from his brothers contributing to the recording, their participation is representative of something else. “Their participation was based on some conversations we’ve had and I asked them if he’d like to be part of the record. “We’ve been discussing doing a family project since years. Their participation is really an entrance to that.” The Messenger’s most distinguishing feature is its wide-ranging sense of musicality. This can be attributed to Eubanks’ many years of experience as the leader of The Tonight Show with Jay Leno. It is more than just that. The prestigious tenure of Eubanks is more evidence that the situation was perfect for his musical personality. Eubanks says it is all music to him. For the album, Eubanks had to not only embrace his musical philosophies but also reflect the common thread in contemporary music. This includes the rhythmic, funky and groove-oriented nature of many tracks. “I love funk, I grew up listening to it. What is the ‘Motown Sound? They were jazz musicians! They were jazz musicians! We jazz musicians can play any song.” Eubanks’ testimony to musical honesty is The Messenger. It is a realization of the most important things in his career and life. He says, “I feel like I’m at a point where I just need to be me.” The album is filled with a sense of discovery and exploration that invites listeners in. He never fails to amaze, and his program reflects that honesty, offering a wide range of moods, textures, and tempos. Kevin Eubanks is taking another step in his development as a musician and composer as well as as a musical communicator with this album. This is Eubanks’ way to make a statement about himself and the importance of the musical spectrum in our lives. He also hopes to spread the message to others. Eubanks says that the title song has a sense of urgency. It also has the energy and message that should be shared. I believe that everyone is the Messenger. We are at a point in our lives where whatever you feel strongly about can help someone or people you love or affect your life…you need to let that message out.” Eubanks added another outstanding recording to his impressive repertoire. Let his message be heard. The Messenger not only shows the technical prowess of Eubanks and his bandmates but is also full of soulful, energetic music with a touch blues. It is a successful message delivered by Kevin Eubanks. from http://www.kevineubanks.com/