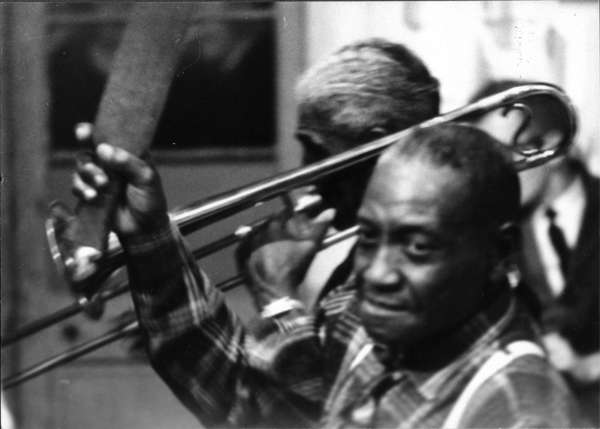 Kid Thomas was born in Sturgis (Mississippi). He moved to Chicago, Illinois as a young boy and began playing the harmonica. He later moved to rock and roll but he started playing blues. He was a regular performer with Elmore James, Muddy Waters and Bo Diddley by the 1950s. Federal Records released his first single, “Wolf Pack”, in 1955. It was not a success and the other recordings he made for Federal were never released. He began his career in Wichita with Hound Dog Taylor and moved to Los Angeles in an attempt to emulate the success of Little Richard. He met George Motola, a record producer, and recorded “Rockin’ This Joint Tonite” in 1959. It was released on Motola’s Transcontinental labels. It has been called “one of the wildest rock’n’roll discs ever recorded” by Kid Thomas, who blew his harmonica and shouted out the lyrics in a frenzy. It was not a commercial hit. He performed with a band in Los Angeles, sometimes as Tommy Louis (sic) Rockers and Tommy Louis and Versatiles. He recorded two singles in 1965 for Muriel, “The Hurt is On” and “Wail baby Wail”; a full-blooded rocker with Marshall Hooks on guitar, but they weren’t hits. Tommy Lewis’ final recording was “(You Are An Angel)”, which was released on the Cenco label in 1969. Kid Thomas was a lawn-mowing man in Los Angeles during the second half of 1960s, but he had little commercial success. He struck and killed a young boy while driving his truck on September 3, 1969. The charge of manslaughter was initially dismissed. The boy’s father, however, waited outside of the courthouse and shot him. From Wikipedia: Kid Thomas died at UCLA Medical Center in Beverly Hills on April 5, 1970.