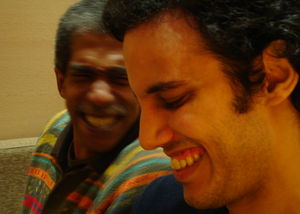 Steve Reid recorded his debut album in 1964 at the age of 19, on Martha and the Vandella’s “Dancing in the Street”. He continued to perform with legends in avant-garde jazz like Miles Davis and Archie Shepp, Sam Rivers, David Murray, and also in soul music such as James Brown and Dionne Warwick. He spent three years in West Africa during the late 1960s, studying African rhythms and playing with Fela Kuti. Four Tet’s sample-based collage combining jazz, folk, and soul textures was created by Kieran Hebden between recording with Fridge (the band he formed with his school friends Sam Jeffers and Adem Ilhan). Output released Dialogue in 1999. After that, Kieran produced Rounds, Pause, and Everything Ecstatic for Domino. Through Antoine, a Paris Jazz Corner friend, the collaboration was possible. Kieran wanted to revisit the intense dialogues of ’70s jazz duos. Steve loved Four Tet, and wanted to explore modern electronic textures. This was something that had not been done well in jazz. The show was held in Paris, London and The Exchange Sessions. from http://www.dominorecordco.us